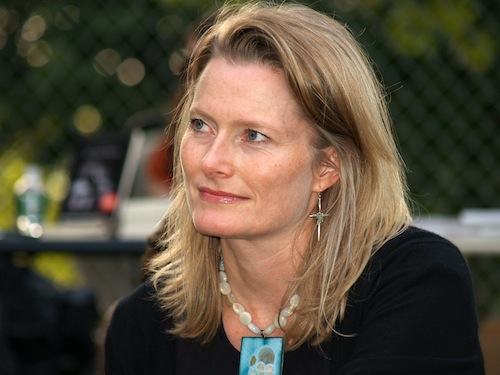 Jennifer Egan thinks about how a person's appearance has no bearing on her success as an author.

For months now I have been trying to explain to people the singular idiocy of A Visit From the Goon Squad, Jennifer Egan’s collection of mawkish, overwritten stories that manage to feel slight despite their relentless self-regard. That shit won the Pulitzer Prize. It must be important, if only as a motionless canary in the dark shaft of contemporary American fiction. I have commiserated with strangers in bookstores over A Visit From the Goon Squad, but I have never been able to explain what’s so infuriating about it to people who haven’t read it. Fortunately, the good people at Slate have released a long video interview with the author. Finally, people who do not want to read ironically can experience the utterly vapid thought process of the woman who wrote, “My eyes were open, but only the ones on my face. My other thousand eyes were squeezed shut.” First installment after the jump.

There she is, speaking incoherently and with great satisfaction about being a writer in Brooklyn and spending a year in Europe after high school. Note that she turned to writing as a means of dealing with the powerful homesickness she experienced on the Continent. “I wrote my way through that misery,” she says, “and ultimately I did have to come home early because I was really struggling.” Egan appears to see no contradiction in this statement, which functions as a fine introduction to her writing: able to recognize the deep significance of human emotions to herself, but not able to consider them with any more depth than is required to identify them. Jennifer Egan knows the deep romantic potential inherent in people feeling stuff. Otherwise, she knows nothing. Hate her with me!