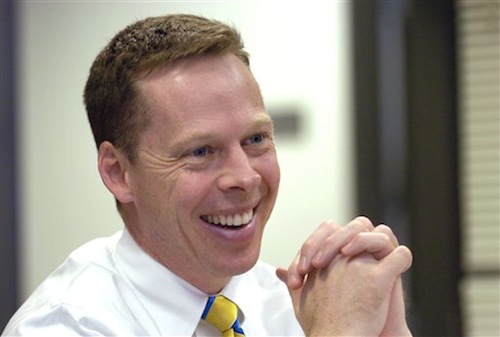 The nomination of Tracy Thorne-Begland to the Virginia judiciary had bipartisan support in the Virginia House of Delegates right up until it didn’t. The Richmond prosecutor was backed by the Courts of Justice Committee, but in a 1am vote—conducted after several state legislators had gone home—the House voted 33 to 31 in his favor, short of the 50 votes he needed for confirmation. The opposition and late vote were attributed to The Family Foundation and conservative lawmakers, who worried that he would be a “homosexual activist.” And like that, Tracy Thorne-Begland’s career came to a screeching halt.

It’s cool, though—he’s used to it. As a Navy fighter pilot in the 1990s, Thorne-Begland revealed that he was gay on ABC’s Nightline—then the nation’s number-one show for coming out—to challenge naval policy against homosexuals. He was promptly discharged, then reinstated by a federal court, then discharged again under Don’t Ask, Don’t Tell. Presumably it was a real thrill ride—not as thrilling as, say, flying an F-15, but with the same sense that your life could be changed suddenly and irrevocably by someone who gets his orders from the sky.

Both sagas suggest why we shouldn’t vote on people’s rights. Thorne-Begland was universally regarded as competent in both his jobs, and in both cases a cadre of people blackballed him for being gay. Those people really, really care about gay dudes. As their name suggests, The Family Foundation focuses almost exclusively on single men and abortions, and approximately 100% of the Virginia lawmakers who voted against Thorne-Begland are not gay. In this context, the charge of activism seems cruelly ironic.

The problem with leaving minority rights to majority votes is that bigotry is necessarily a popular position. No amount of activism by gay men would produce a law that, say, defined marriage as between one man and one other man with nice abs. Meanwhile, a fair amount of activism has led 30 states to draft laws against gay marriage at a time when public acceptance of homosexuality is the highest it’s been in this country’s history. I cannot prove it, but I suspect that bigots are generally A) easy to wind up and B) susceptible to other people’s views. Like Thorne-Begland, minority populations are therefore at the mercy of whatever confident busybodies decide to whip up a pogrom against them.

Which is why we have a government. We do not need to use our monopoly on force to protect the rights of the many, because there are so many of them. For the same reason, we cannot let the government become simply an instrument of popular will. The most ardent defender of radical democracy must admit that Ke$ha is a popular musician and Doritos are a popular food. The people have terrible ideas; they are geniuses to themselves and morons to everyone else. Every American citizen should be allowed to eat Cool Ranch and listen to “Blah Blah Blah,” because that’s their right. But no one should be forced to, because what everybody likes is repellant to a small number of people, and those people are, um, right.

In a representative government, a right functions as a place where the individual is immune to democracy. It acknowledges one of the foundational principles of human society: that some things are nobody else’s business. It also acknowledges a perennial problem: a certain subset of the population wants to be in everybody else’s business. Last night in Virginia, that subset won. They will keep winning as long as we keep letting the many decide the rights of the few. The thing about other people is that there are so many more of them than there are of you, and almost all of them are dicks.