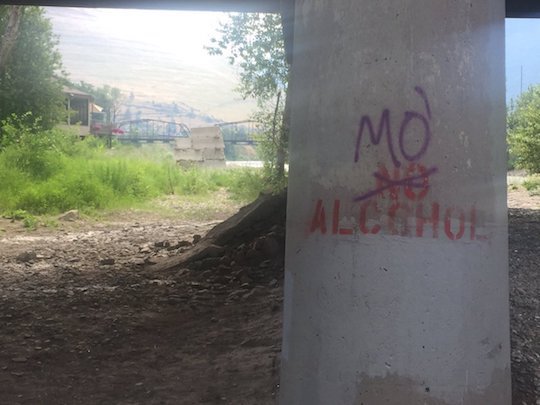 Art has the power to change lives. It can redraw the boundaries of our public discourse and stretch the horizons of our private hearts. When you study its history and see the important role it has played in human development, you realize that art has the power to do anything, except make money. Mostly, though, it has the power to suck. Back when art was two carvings a year and whatever Michelangelo put out, it had to be really good. Now that everyone is an artist1 and all behavior is performance, no single unit of art has to do much work. It just has to be seen. Today is Friday, and the world is producing art on a larger scale than ever before. Won’t you tactfully remark on the size of the canvas with me?

First, the good news: The C-Star, a ship that anti-immigration activists bought to keep refugees from reaching Europe, has been saved by a refugee rescue boat. The bad news is everyone is fine. A right-wing European group called Generation Identity commissioned the C-Star to investigate refugee rescue boats operating in the Mediterranean Sea, which a subset of YouTube users believe are secretly engaged in human trafficking. Last week, the C-Star suffered an engine failure off the coast of Libya. The nearest vessel was a cutter operated by Sea-Eye, one of the NGOs the C-Star had been tasked with stopping. Cheap European irony! This is why we have to resist the globalist agenda before it’s too late, and put our refugee/naval policy back in the charge of those who know best: YouTube power users.

The C-Star is a dumb idea, but at least it has a concrete purpose and a cause-and-effect plan to carry it out: commission ship, harass rescue boats, stop (i.e. drown) refugees. That’s the right-wing crackpot approach. Compare to the liberal approach: make gesture, publicize gesture, wait for power to admit it was wrong. On Wednesday, artist and filmmaker Taran Singh Brar inflated a giant, Trump-like chicken outside the White House. Get this: the chicken had big, gold hair! Trump would have been mortified if he saw that, which he did not, since he was still at his golf resort in New Jersey. But the important thing is that Brar made a statement. To wit:

Mr. Brar, 31, told USA Today that he wanted to make a statement about the president being a “weak and ineffective leader.” He added, “He’s too afraid to release his tax returns, too afraid to stand up to Vladimir Putin, and playing chicken with North Korea.”

Here’s a tip for the Kombat! Kids: If you want someone to stop playing chicken, do not accuse him of being weak and fearful. Brar applied for his permit months ago, and he couldn’t have known what world events would look like Wednesday. But we’re all grateful to him for taking the time, during this period of heightened tension between the US and North Korea, to call the president chicken.

The artist cannot be responsible for how his or her work is received. The artist merely creates, worrying about the consequences when they come. In completely unrelated news, half of Republican respondents to a recent Washington Post survey said they would support postponing the 2020 election until we could make sure only eligible citizens voted, if President Trump suggested it. That’s astonishing, at first. Then it makes one wonder how many respondents would support arming snowmen with automatic rifles if a pollster suggested it. We’ve talked about this issue before, but what people say they support in surveys is not what they support in public life. The American electorate gets crazier under questioning. Concepts far outside the Overton Window take on the appearance of pressing issues once you start polling people about them. Such is the pollster’s art, I suppose.

The secret to entertaining people is to give them something to get outraged about. Matt Pearce reminded me of the iconic “Host,” David Foster Wallace’s 2005 profile of the southern California talk-radio host John Ziegler. Lest you imagine the present decade is unusual, “Host” addresses a cluster of themes that sound awfully familiar: whether Ziegler and his listeners live in their own bubble of information, if he actually believes what he professes on air or if it’s all kayfabe, whether his audience understands it as such, et cetera. Granted, none of the stories Ziegler reports on his show are made up. But the panic over whether a large swath of the country has become simultaneously radicalized and disconnected from factual information is right there. Looks like everything old is new again. Either that or the election of a deranged reality TV star by self-radicalized internet shut-ins is the culmination of a process that’s been occurring for the last 12 years, and we’re not looking at a cycle so much as a metastasizing. Ha!