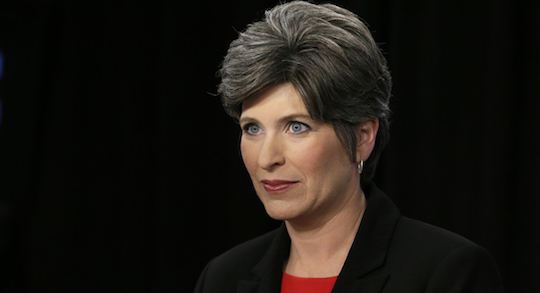 The problem with this blog is that it’s not nearly folksy enough. Sorry—I meant to say, “dang old blog is dicty as all get out.” You’ll never win an audience by encouraging them to rise to meet you. Better to show that you’re just like them—more famous and wealthy, of course, but definitely not cosmopolitan or freethinking. The ideal senator, for example, would be a hog-castrating soldier mom who wore bread bags for shoes. Of course I am speaking of Senator Joni Ernst (R-IA), who was chosen to rebut the State of the Union Address but still presented herself as a simple country  bumpkin. Today is Friday, and what this country needs is a few people who are just like everybody else. Won’t you pander to an imagined mainstream with me?

First, the good news: Ernst’s claim to have worn Wonder Bread bags over her shoes as a child is probably true, at least according to anecdotal evidence gathered by PolitiFact. Plenty of people in Iowa wore bread bags on their feet. Granted, they wore them on the inside of their shoes in order to create a waterproof barrier between their socks and any potential leaks. You can’t walk 20 feet on bread bags without tearing a hole in them, so Ernst’s parents were not so much poor as dumb. But the important thing is that being poor, growing up on a farm, wearing camouflage and voting Republican are all basically the same thing.

The bad news is that Ernst can only account for three out of four. As I’m sure you’ve read in any number of thinly-sourced liberal web publications, Ernst’s family received about $460,000 in farm subsidies from the federal government between 1995 and 2009. That comes out to about $30,000 a year. It’s not enough to get a family of four above the poverty line, but it is a comfortable income for one person, especially when the labor demanded is not growing corn. Thanks to the magic of web journalism, we all know how much subsidy money the Ernsts got but not how big their farm is. At thirty grand a year, though, it’s reasonable to estimate that their chunk of corn-producing Iowa farmland is worth at least a million.

But growing up poor isn’t about how much money you have—it’s about thinking of yourself as the victim of other people’s entitlement. Obviously, a whole bunch of the wrong kind of poor people are out there conspiring to keep the hard-working, money-and-land-having poor people down. Why can’t people know their place? Over at the Chronicle of Higher Education, Corey Robin argues that the conservative mindset is fundamentally reactionary, resisting any change perceived as insurrection from below. That accounts for basically all forms of change, since people who are already running things don’t feel inclined to revise the system. Any change has the potential to break what Burke called “the chain of subordination,” which people who run things naturally consider the foundation of civilized society.

Case in point: God. As soon as people stop believing in that, the whole system goes kerflooey. You can’t have morality without the natural subordination of individual to church and divine—oh. It turns out that secular families have articulated ethics and senses of purpose that are as strong if not stronger than those of religious families. According to a Duke study, people raised in godless households are less racist than their religious counterparts. The LA Times reports that “many psychological studies show that secular grownups tend to be less vengeful, less nationalistic, less militaristic, less authoritarian and more tolerant, on average, than religious adults.” And less than 1% of the US prison population identifies as atheist.

But did they grow up with a clear sense that they were right about everything? That’s what’s missing from the culture of today: the overweening confidence in one’s own opinions that comes from knowing the omnipotent creator of the universe agrees with you. He also wants you to wear camouflage on television, which is weird when you think about it. But who am I to question the motives of God Almighty and his various representatives on Earth? If they want me to cut welfare funding and wear bags on my shoes, so be it. Ernst should just be careful not to split the bags-as-footwear vote, though. I quote the Beastie Boys: