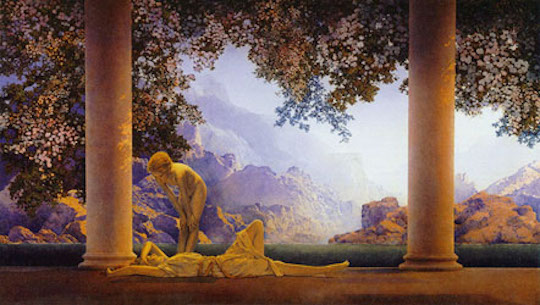 Nymphs and Satyr by William-Adolphe Bouguereau

Kitsch is like pornography: I know it when I see it, and it’s all over my grandma’s house. Along with irony and existentialism, kitsch is one of those concepts that is often mentioned and seldom understood. It is bad, but everybody likes it. It is ineffable but easily identified. “Kitsch causes two tears to flow in quick succession,” Kundera wrote. “The first tear says: How nice to see children running on the grass! The second tear says: How nice to be moved, together with all mankind, by children running on the grass!” Today is Friday, and the ideas that once invigorated us now ease us comfortably along with them toward death. Won’t you rejoice in the commonplace with me?

I got that Kundera quote from this rad essay by Roger Scruton, in which he theorizes that modern art has succumbed so willingly to kitsch because artists be calculating. The cardinal sin of modern art, Scruton says, is to make kitsch by accident. The safe strategy is therefore to make kitsch on purpose, which explains why a hideous porcelain Michael Jackson is among the most valuable pieces of art in our era. That’s all well and good for Jeff Koons, but those of us who need succor from art and not just money are in trouble. There is something fundamentally anti-human about kitsch, which gives us the consoling feeling of life when we rail against it. I poach another quote from Scruton, this one originating with Oscar Wilde:

A man must have a heart of stone not to laugh at the death of Little Nell.

It is those discourses in which laughter is forbidden that wind up being the funniest of all. Case in point: Brittney Cooper’s unintentional work of satire How white entitlement marred my trip to a Ferguson teach-in. I do not doubt that Cooper’s trip was irrevocably marred, but her tale of white entitlement appears to be the story of two assholes meeting on a train. In a nutshell: Cooper is riding the train with her headphones in and her bag on the seat next to her. A white man moves her bag to the floor and sits in the seat without her permission. When she remonstrates, he complains that he asked but she did not respond, uttering the asinine remark quoted in the post headline. Both of these people have acted inconsiderately, but I had a hard time agreeing with Cooper’s claim that this white man’s remark was “the height of racial disrespect and indignity.” I would say the height of racial d. and i. was maybe when all those white cops got away with killing black people last month, or possibly Plessy v. Ferguson. But Cooper is the Seinfeld of personal outrage, turning a minor interaction with a stranger into a relentlessly unfunny disquisition starring her.

Meanwhile, wealthy white men are hilarious! Case in point: Michael Lewis’s wish list for Wall Street, which includes the genius expedient of banning anyone under 35 from working at a trading desk. Rather than see Wall Street flooded by testosterone-addled Cornell grads every year, Lewis suggests that we channel all those aggro analysts into for-profit regulatory agencies. God willing, it will become easier to make money enforcing  the rules than breaking them. This plan is so good that it must be a joke.

In other intersections between satire and the real actions of human beings, Galapagos is moving to Detroit. The art and performance space that once symbolized the revitalization of Williamsburg1 is now the canary fleeing the artisanal cheese mine of New York. Don’t worry: NYC is still the cultural capital of the world. It’s just much easier to make art anywhere else. But do you want to weld experimental sculpture in your live/work loft, or do you want to be surrounded by aging celebrities who used to do that? Please don’t answer.

Art is sad because it sucks now. But it is also awesome? I still love it, anyway, even if a substantial portion of my love is getting pissed off at individual works. ‘Twas always thus: 85% of anything is crap, but the crap of history is lost to us. We should take a lesson from history and forget the crap of now to concentrate on what we like best. You can do just that at 14 for 14, Edwin’s Tumblr to which users can submit their mixes of the 14 best songs of 2014. That’s a genius idea, right there, and it is jumping off. Get in while it’s hot, before it fills with finance jams and they have to move it from the internet to Detroit.