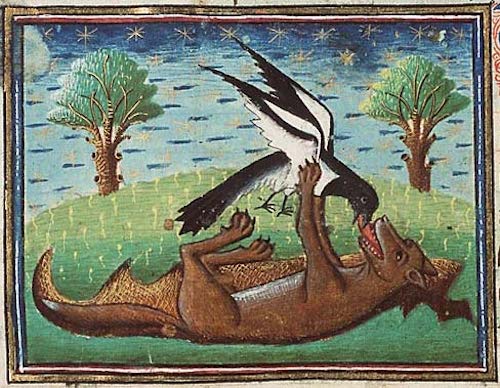 A fox and a magpie make out on the medieval internet.

There must have been some point when the internet was a reliable source. The first time someone was lied to over the internet—probably in 1979, when Al Gore had to enter each new email address manually—it was like getting lied to in a letter. Then there was a long time when finding a lie on the internet was approximately as scandalous as finding a lie in the newspaper. Your aunt still lives in this time. The rest of us now encounter falsehood on the internet as a feature of the medium. Today is Friday, and nothing you read on this screen is necessarily true. Won’t you make the classic blunder with me?

I am sick, so I have a lot of time to follow the Olympics. An event normally as fascinating as the Macy’s parade has been enlivened this year by its happening in Russia, land of the supervisory photograph. Whether rounding up stray dogs or frantically building hotel rooms, Sochi is not ready. The story has generated its own hashtag/Twitter account, #SochiProblems, which has in turn generated this UpRoxx slideshow, which begins with a meme image from 2011. That is not a Sochi problem. A simple Google search would have confirmed that the image is fake—at least in the sense that it is not a thing that happened in Sochi—but Josh Kurp’s project is not to report what is going on. He’s just gathering funny images from a Twitter feed, as the later slide of a scene from Family Double Dare suggests. It’s not a report of events, or a comment on events, or an original series of photos. It’s just some content. The purpose of UpRoxx is to make content more popular.

That model is a terrifyingly insatiable dragon that will eat our very concept of the real, but whatever. At least we have freedom of speech. In Russia, the deputy prime minister in charge of Olympic preparations could barely voice his suspicion that anti-Russian westerners were creating #SochiProblems before the means of discourse were wrested from him. The Wall Street Journal account is a masterpiece of comic structure:

Dmitry Kozak, the deputy prime minister responsible for the Olympic preparations, seemed to reflect the view held among many Russian officials that some Western visitors are deliberately trying to sabotage Sochi’s big debut out of bias against Russia. “We have surveillance video from the hotels that shows people turn on the shower, direct the nozzle at the wall and then leave the room for the whole day,” he said. An aide then pulled a reporter away before Mr. Kozak could be questioned further on surveillance in hotel rooms.

Like Russians are going to invite people from all over the world to Sochi and not videotape them showering? You have to think these things through. A corporatocratic security state is going to try to trick you, so you  have to get your information from the methods and not the content of its deceptions. For example, we know from alert reader Bret Hollingsworth that the National Republican Congressional Campaign is creating fake websites for Democratic candidates. Here either CNN is exaggerating or the NRCC is incompetent, because the “fake” site JohnLewis4Congress.com claims that the candidate is tired of letting Max Baucus “get all the credit for advancing President Obama’s out-of-touch agenda.” Methinks I detect a fissure in the crystal sheen of imitation. It is kind of awesome, though, that the giant “DONATE” button they put under John Lewis’s name directs money to his opponent’s party.

Republicans: they’re utterly dishonest and crazy, as New York City’s controversial Stop-and-Kiss program proves. Lately I have enjoyed seeing my own satire taken seriously, and so my appreciation for Literally Unbelievable is renewed. As hundreds of shoddy English teachers fail to mention when they’re teaching Jonathan Swift, people aren’t “tricked” into agreeing with the literal message of a satirical work. They’re tricked into disagreeing with high dudgeon, ideally making reference to how stupid people are.

Everyone is really dumb. Everyone. It is not fair to expect the internet to make us smarter by putting us all together. I think now is the time to admit that it’s not a medium for information but for culture. They thought the internet would tell us what life is like on the other side of the world, but really it’s for finding old soul music.

He laughs like that in a lot of the songs.