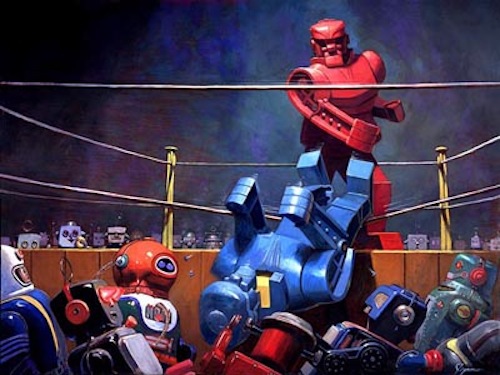 Minds more astute than mine have pointed out that the time machine must be impossible, because if it will have been*

invented, we surely would have had visitors from the future by now. Maybe, though, they just don’t want us to bore them with arguments about how especially crazy everything is now. Surely our present moment constitutes an ordinary broomstroke in the sweep of history, but it seems crazy and futuristic. Ours is an age shocked by its own novelty. Whether we’re lauding the world-changing potential of Twitter or decrying the precipitous fall of old-fashioned morality, we seem to be a nation out of time, blithely declaring each day the turning point we’ve all been waiting for or the final goodbye of the world we once knew. As Bob Dylan once said, the times, this is going to be a really short concert because I am super old. In preparation for the last weekend of the beginning of our lives, Combat! blog presents links to stories that indicate the onset of a new age, if only by our panicked resentment of the change. Won’t you turn a little of the future into the past with us?

Before we get started, I would like to announce—with a heavy heart—that Combat! will no longer be publishing its print version. I know that many of you liked nothing better than beginning your morning with the broadsheet version of this blog, the complementary smells of fresh coffee and reeking newsprint welcoming you to a day in which you apparently didn’t have to go to work or anything. The sad fact of the matter is that lately, the only thing special about print seems to be the paper. According to this week’s Times, revenues from internet advertising exceeded those from magazine ads for the first time in 2009, suggesting that the great gray ladies of journalism or no longer able to bring in the johns on promises of superior expertise. Yes, in this metaphor websites are young prostitutes, but that’s not my point. My point is that, at least from advertisers’ perspectives, the primary text medium of our age is now the internet. Welcome to the future, dicks. I hope you’re happy with what you did to the Baltimore Sun, not to mention The Hatchet Herald.

Don’t worry, though—even if our we get our information through a series of optical tubes and flashing pixels, we can still use that information according to the imagined dictates of iron-age fishermen. The Oklahoma legislature overrided a gubernatorial veto Tuesday to pass a law that will force women who want abortions to view a sonogram while listening to a description of the “heart, limbs and organs of the fetus.” Presumably, the measure will protect family values by encouraging women who do not otherwise want children to raise them out of guilt. Abortion rights activists view the Oklahoma law as the most extreme in the nation, but lawmakers disagree. “The goal of this legislation is just to make a statement for the sanctity of human life,” said state senator Todd Lamb. “Maybe someday these babies will grow up to be police officers and arrest bad people, or will find a cure for cancer.” Lamb is also working on a bill that would require Oklahomans to read Great Expectations before putting on a condom.

You know what’s better than picking on church people in Oklahoma? Using the power of the internet to pick on drunk cell phone users world wide. The New York Times, which has thus far furnished every article discussed in today’s post, has run a particularly satisfying speculative journalism piece about people who criticize others’ grammar and usage on Twitter. Like the best examples of its form, it raises a lot of questions about A) how widespread a phenomenon has to be before we’re willing to call it “news” and B) what weird lives such people must live, if they exist. At least provisionally, they seem to. You would think that this would be exactly the sort of thing that I would go for, since I love grammar and I love being a dick, but oddly I do not love being a dick about grammar—particularly on the internet. More promising is the website Tweeting Too Hard, in which the self aggrandizing tweets of douchebags are gathered for our amusement. It’s hard to pick a favorite, but I’m going to with either “All I want is one day a year when I’m not visually assaulted by uglies and fatties,” or “Dear terrible barista: if the latte I’m drinking is burning my tongue, you did it wrong. Next time, let’s not scald the milk.” Schadenfreudists take note.

After my screed against Facebook yesterday—and I agree with Mose and Mike that it serves a lot of valuable functions I willfully ignored—I was weirdly fascinated by this Microsoft Kin ad, in which a hip twentysomething sets out to determine whether she can really be friends with members of her social network. Jesus, I hope “social network” does not become a popular phrase. Rosa, who appears to be the saturated center of a Venn marketing diagram, flies to Hawaii to visit someone she had previously known only through Facebook. What follows says more about the act of declaring someone your friend before you really know them than it does about modern technology and personal connections, but maybe that’s the point. Do you feel cold and alone yet? Don’t you worry. Werner Herzog knows where you are: