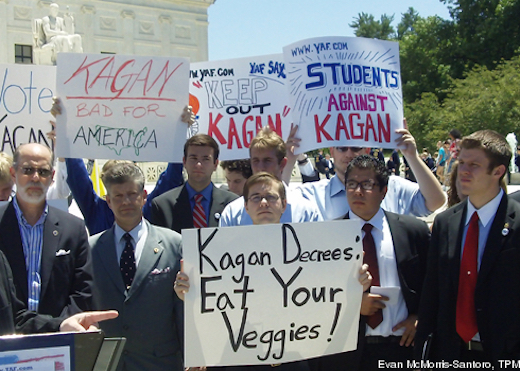 Young conservatives protest the nomination of Elena Kagan to the Supreme Court in 2012.

Is there any person more alarming than a college Republican? I understand 30 year-old home-buyers and child-rearers voting for whomever might give them a tax cut. I can even empathize with the Boomers’ urge to return America to the dimly remembered conditions of their childhoods. But what kind of 20 year-old is nostalgic for good old days he never experienced? Whose youthful idealism leads him to march for fewer restrictions on business and a return to traditional values? Today is Friday, and the kids have turned from their natural interest in drugs and butt stuff to embrace conservative politics. Won’t you marvel at these unwasted youths with me?

The good news is that West Virginia has elected the nation’s youngest state legislator in Saira Blair. The bad news is that Blair just turned 18, and her dad is a Republican state senator—something the Wall Street Journal leaves out of its account of the Blair ascension,1 but New York Magazine includes. Props to Katlyn for the tip. Don’t worry: Saira is her own person and not just a younger, funner vehicle for her father’s political connections. Here she is on an issue she and her dad disagree about:

“One is that we’re both pro-life, but I do not support Plan B contraception, whereas he does. And there’s just smaller issues that will probably come up as we begin serving together in January.”

Ladies and gentlemen of West Virginia, I give you the heartless confidence of youth. It takes a special 18 year-old to decide that when it comes to emergency contraception, she knows better than other adult women, the FDA, and her dad. Best of luck to Blair in her new and presumably first career as a lawgiver. Don’t get pregnant.

Of course, it would be irresponsible to imply that a whole generation had lost its way just because one college freshwoman won office on a platform of making it harder to fuck. The rest of America’s college students are pursuing more recognizable enthusiasms of youth, e.g. multilevel marketing schemes. Over at Rolling Stone, Caleb Hannan has written this fascinating feature on Vemma, a vitamin/energy drink that you can totally sell to your friends. Even better, though: you can get them to sell Vemma to their friends and give some of the money to you. It’s not just a beverage; it’s a lifestyle and possibly a pyramid scheme. But what are you going to do—finish college and take tens of thousands of dollars of debt into an anemic job market?

“My professor starts talking about biomes,” [Vemma rep Alex Morton] says. “I’m like, ‘My major is communications, and this guy wants me to memorize all the animals in the rainforest? I gotta go.'”

Of course, it would be irresponsible to imply that a whole generation had lost its way just because one college freshwoman won office on a platform of making it harder to fuck.

Lest you worry that America’s value system has become warped, I offer you this refreshing comparison: Islamic authorities in Malaysia are investigating an event called I Want to Touch a Dog. Syed Azmi organized the dog-petting festival, ostensibly to promote understanding of sertu, the Islamic practice of properly cleaning oneself after touching certain animals. “It is not to promote dog adoption,” Azmi told The Malaysian Insider, but religious leaders saw through his ruse. I quote Nurul Islam Muhamed Yusof, a leader of the youth wing2 of the Pan-Malaysian Islamic Party:

“Previously there was the organization of Topless Friday, followed by Oktoberfest, then I Want to Touch a Dog. We worry that there will next be a Sex & Condom campaign with the rationale of safe sex to ostensibly prevent the spread of HIV/AIDS.”

The horror. Be sure to watch that video of Azmi describing his event, partly because he is very likable and partly because of his distinct manner. Maybe this is a cultural difference, but I suspect that I Want to Touch a Dog might be working up to a more controversial issue in Malay acceptance. Also, Nurul Islam Muhamed Yusof is a crazy name. Imagine if Saira Blair were named Saira Christianity Jesus Blair.

I’ve said it before, and I’ll say it again: foreign people are dumb. Just look at Russell Brand, who is fun when playing a British idiot in movies but substantially less so when fomenting revolution as a British idiot on Earth. I was in my early twenties when I first heard Mose use the phrase “fake smart for dumb people,”3 and it’s been a handy if guilty classification ever since. From simultaneously misquoting and misattributing to praising Castro and Guevara for being “sexy, cool, tough,” Revolution is less a manifesto than a rebranding. He also describes the economy as “just a metaphorical device.”

Money isn’t even real, man. It’s cool to have a bunch of it now, though, provided you hate the system it supports. All politics is personal, by which I mean it’s a matter of opinion.