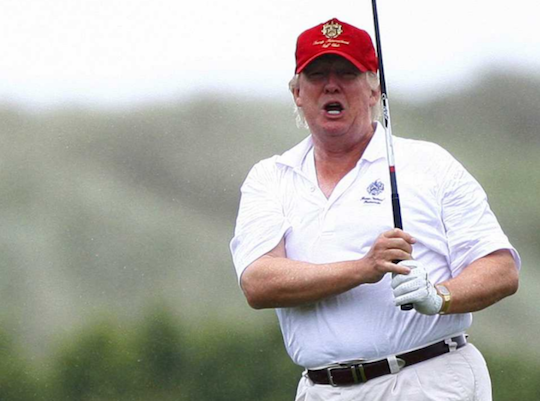 Donald Trump is like if the evil country club president in Caddyshack and Rodney Dangerfield in Caddyshack were the same character. “Hey everybody,” he yells in his underground bunker as hot Korean nuclei blast through our widening eyes. “We’re all gonna get laid!” He’s not as funny as Dangerfield or Ted Knight, much less both of them together. But he owns a lot more golf courses. Today your New York Times reports that one of his golf courses contains a plaque commemorating Civil War battle along a nearby stretch of the Potomac it calls “The River of Blood”:

“Many great American soldiers, both of the North and South, died at this spot,” the inscription reads. “The casualties were so great that the water would turn red and thus became known as ‘The River of Blood.’” The inscription, beneath his family crest and above Mr. Trump’s full name, concludes: “It is my great honor to have preserved this important section of the Potomac River!”

He put an exclamation point on the plaque. That’s a rookie mistake in the area of inscription. Also, that river of blood thing is made up. According to at least three regional historians, no battles were fought at the future site of Trump’s golf course. While soldiers sometimes crossed the river there, none of them died.

“How would they know that?” Trump asked when confronted with this information. He went on to say that several historians had told him of a battle there, declining to give their names, before saying that the historians had actually spoken to several of his employees, whose anonymity he also preserved.

This raises an interesting question: Can learning about thee president’s various insipid lies eventually cause my brain to shoot out of my nose like when you squeeze a Capri Sun? Like must I spend each day in astonishment at the next dumb elaboration of the last poorly constructed lie, or will the astonishment hormones build up until they finally explode and spray my face in an even layer across my windshield? In this scenario I’m just driving around, thinking about how Trump said no one can prove he didn’t bang Selena or whatever. One minute I’m alive, outraged for the 852nd consecutive day of the administration, and the next minute I’m dead—or not dead but driving without a face, bearing down on the accelerator and wildly twisting the wheel in the hopes that these movements coincide with correct driving, because I have no sense left but taste.

I was going to say that Trump put forward a classic cracked-plate defense with his multilevel evasion here, but fuck, man—when will we get something from the day’s experience besides an expanded taxonomy of lies? Is it just going to be Ecclesiastes from now on, marveling at how unfair everything is until we are dead? It’s times like these, when presidents are TV personalities who lied about Civil War battles in commemorative plaques on their golf courses, that you realize how useless outrage is. I deserve better than this, you think, looking at the daily news. Someone should treat me with respect. Then you feel the lash of your Korean overseer, and you drop your phone and get back to work. The whole country has gone to seed, and you know whose fault it is? Bernie Sanders.