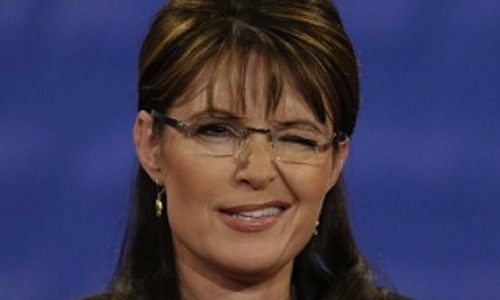 "In fact, Sean, everyone has moved to the right lately."

Pilloried in the press, maligned by the media and, I dunno, blamed by the blogosphere, Sarah Palin refuted allegations that rhetoric like hers contributed to the Tucson shootings by going on Sean Hannity Monday night and proving, once and for all, that words don’t mean anything. Like a pretty pretty octopus, she held still for a second, changed colors, and vanished behind a high-pressure jet from her word hole. Quote:

Those on the left hate my message and will do all that they can to stop me because they don’t like the message.

That little tautology is the most meaningful thing she said during the whole interview. For Sarah Palin, “because” means “and also.” All the other words mean the same thing as one another.

By now, you are probably familiar with her bald-faced claim that the crosshairs on the SarahPAC map of congressional districts were, in fact, surveying marks. Hence the popularity of her slogan around that time, “Don’t retreat—recalibrate!” Even though those surveying marks were not crosshairs at all and only a lamestream liberal reporter would even think of that, because Palin sure didn’t, she took down the map after congresswoman Gabrielle Giffords was shot. Not that doing so in any way acknowledged that, from a graphics perspective, surveying crosshairs and targeting crosshairs are the same thing:

I don’t think [removing the map] was inappropriate, if that was going to cause more heartburn. Knowing that that had absolutely nothing to do with an apolitical or perhaps even left-leaning criminal, I didn’t have a problem with that being taken down.

See? Her only concern is not causing more heartburn. One pictures the sixteen year-old Palin, rejected by her high school crush, eating Tums after Tums at the kitchen table and demanding to know why these things don’t goddamn work. One is also reminded of the rabbinical story of the cracked plate.*

Palin was fine taking down the map because she knew it had nothing to do with the shootings, since the shooter was apolitical, and besides, he leaned to the left.

Palin never closes a door without opening a window, so her original deployment of this defense sparked another controversy, since it employed the phrase “blood libel.” Her saying “blood libel” is not, it should be noted, anti-Semitic. She’s simply comparing the claim that she speaks irresponsibly to the accusation that Jews use the blood of Christian infants in their religious ceremonies. But that doesn’t matter either, because she didn’t know what “blood libel” meant, anyway:

I don’t know how the heck they would know if whether [sic] I did or didn’t know the term ‘blood libel.’ Nobody has ever asked me.

See, this is why you have to ask follow-up questions. You can’t just start analyzing what she says right after she says it. First, you have to ask, “Ms. Palin, do you know what all those words mean?” Of course Palin didn’t know about “blood libel.” It was just a phrase she heard, around meetings and stuff, and decided to use in her prepared video statement. God, lamestream media—do you research anything?

At this point, Palin has established her central message: none of this matters. She is thereby freed to move on to her secondary message, which is that she is very important. After telling Hannity that her family receives death threats—popularity hint: if people are at a funeral or otherwise mourning someone who has died, point out that you were almost dead one time, too—she says not to worry about her, because she is strong.

Other people are facing much greater hardship and making much greater sacrifices than I am. I’ll take the darts and the arrows because I know others have my back, and I have their back.

First of all, it’s “slings and arrows.” “Darts and arrows” is less like you’re Hamlet in soliloquy and more like you’re yell-talking in a bar. Second, if people had your back, you would presumably not be getting hit with so many missile weapons. Third, here is one of the people who has your back:

For the first time in my life, I agree with Newt Gingrich.