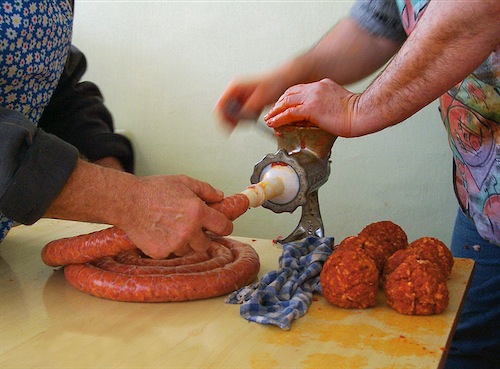 In the pantheon of quotes that have no exact wording and are alternately attributed to Oscar Wilde, Benjamin Franklin and Mark Twain, perhaps none is more satisfying than “Those who enjoy democracy and sausage should take care to learn as little as possible about how either is made.” Like a public men’s room, democratic self-government is both utterly necessary and really gross. The problem is that so many people are involved. If you’re like me, you can’t help but notice the paradoxical phenomenon that your friends are conscientious, dignified people whose generosity and depth of character makes them an invaluable gift, whereas everyone you don’t know is a stupid asshole. Democracy is a great way to decide what we’re doing on Saturday night, and a terrible way to decide how to reform health care. Or, rather, it’s the second most terrible way to decide that, just after every other means of government ever devised by man. If you think the Tea Party is irritating now, just wait until one of them becomes king. Until then, enjoy this collection of instances of mass opinion, be they public opinion polls, widespread beliefs, popular media or the concentrated retardation that is an elected official. It’s Friday, and we’ve all agreed that for the next two days it’s okay not to work. At least democracy got one thing right.

First, the good: a recent poll indicates that 73% of Americans favor the legalization of marijuana for medicinal uses, which is great news for anyone seeking to manage their glaucoma/enjoyment of the movie Waking Life. On the other hand, almost fifty percent of those who favor medicinal marijuana also say that they would object to a store that sells said marijuana opening “near other stores in their area.” Not even near their houses—they’re apparently worried about the possible influence of a weed dispensary on Bed, Bath & Beyond. A similar percentage also agree that legalizing medical marijuana will make it easier for people to get it “even though they don’t have a real medical need.” So half the people who are in favor of medicinal marijuana also believe that it wouldn’t work as intended and would harm businesses in their communities, but Jesus, the Animal Collective show is coming up.*

Now, the bad: Remember that 73% figure from the last paragraph? (If you don’t, I assume you have already taken the law into your own hands.) That’s also roughly the number of Americans who say they believe that heaven is a real physical location, according to this Slate review of a new book by Newsweek correspondent Lisa Miller. Forty-three percent believe that their pets will be in heaven with them, which A) sounds very nice and B) suggests that maybe there’s a correlation between widespread belief in heaven and what I am going to charitably call wish identification. “Show me your heaven, and I’ll show you what’s lacking in your life,” says Johann Hari, less charitably. If you would like to hear a mean girl point out how heaven is bullshit, read that article. Come to think of it, “Would you like to hear a mean girl point out how heaven is bullshit?” should probably be the first question on any test designed to distinguish me from an an android replicant. Or from, you know, the vast majority of Americans.

If author Eric Kaufmann is to be believed, the number of people calmly reassuring their labradors that they’ll see them in heaven before strapping on explosive vests and heading to the opening of the new Harry Potter movie is only going to go up, thanks to fertility rates. Kaufmann is the author of a new book that, among other things, points out that the birth rate among self-described secularists is just under replacement levels, whereas the birth rate among fundamentalists is roughly seven babies per woman. Yes, seven. You know that dude on Dittmars Boulevard who builds an enormous cross in his front yard every Easter and then climbs onto it in a crown of thorns and screams at you to repent when you’re trying to walk to the diner? No? Well, by the end of the century there will be 343 of him. If “blame” is the right word, Kaufmann blames secularism for containing the seeds of its own destruction: an emphasis on liberal individualism and multicultural tolerance that prevents us—unless certain traditions we could name—from forcing 14 year-old girls to have kids and setting fire to anyone who owns a telescope. I haven’t read the book, but I think he’s saying that the only way we can compensate for the higher birthrate among religious fundamentalists is for each secular humanist to kill three religious fanatics. Girls too, everybody.

I suppose, if you’re the kind of person who insists on doing everything the hard way, we could also try to spread education and combat falsehood with logical investigation. That’s what the founders of Snopes.com, David and Barbara Mikkelson, are doing, by running a million-hit website dedicated to debunking urban myths, political rumors, and other things you find in emails from Tea Party Nation. They’re also providing me with a model of marriage that will probably make my expectations re:relationships even more bizarre and unrealistic, but whatever. The important thing is that they finally proved that Bigfoot doesn’t exist. Or did they? When you think about it, they only proved that there’s no proof he does exist. You know, there’s such a thing as faith, Mikkelsons.

You know who definitely does exist, and is possibly the biggest idiot in the world? No, not this commenter on my Obama/Hitler post—I’m talking about Representative Hank Johnson (D–Ga.), the congressman who warned us that sending 8,000 additional servicemen to Guam might cause the island to “tip over and capsize.” When I first heard about this story, I assumed that Johnson’s comments were metaphorical, or at least taken out of context. Having finally watched the video—sent to me by Aaron “The Baron” Galbraith, who is professionally employed in the field of making sure that fewer people say stuff like that—I’m pretty sure that Johnson meant it. I’m also a little concerned at A) the difficulty he experienced, while speaking at a congressional hearing, in remembering that word that means “not wide” and B) his and Admiral Robert Willard’s collective unwillingness to hazard a guess at the square mileage of an island agreed to be roughly 10 miles wide by 25 miles across. These are our lawmakers and military commanders?

Fortunately, we have a wise and discerning media to evaluate their statements. Go ahead and read the lead of this article, and then tell me whether they still have editors at the Associated Press. Two guys writing that, and still they didn’t know better than to make a lame half-joke predicated on Barack Obama’s enjoyment of chicken. Come on, son(s). If you’re tired of watching the inevitable disintegration of the American press and just want things to cut to the chase, may I suggest this video? It’s not just a weirdly transcendent glimpse of American consumer culture—it’s a metaphor!

Once again, Combat! blog has celebrated the oncoming weekend by making everyone kind of sad. Don’t worry, though. There are still smart, interesting people in the world, and just because all of them seem to have boyfriends doesn’t mean they can’t still be beacons of hope. This week, everyone at the Combat! blog offices has been reading Hyperbole and a Half—though definitely not falling kind of in love with its author, because that would be weird. We haven’t even noticed that she used to live in Missoula, and we certainly haven’t imagined what it would be like to comfort her during a thunderstorm. Now that we think about it, that’s kind of a weird fantasy. Maybe we just want a dog.