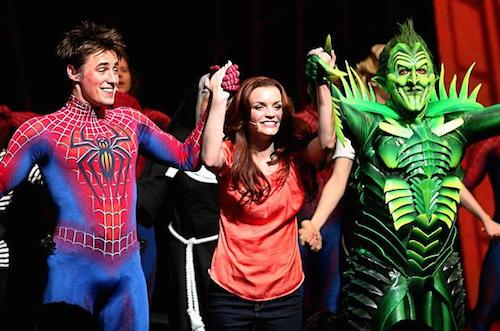 The cast of Spider-Man: Turn Off the Dark relishes the simple thrill of being alive.

Certain media are suited to certain stories. When he was torturing future generations with the Poetics, for example, Aristotle realized that plays work best for narratives that are unified in place, time and action. Movies based on plays invariably feel cramped and stultified, using our most agile temporal medium to tell the story of four people walking in and out of a room to argue. Movies are about bus explosions and journeys to Mordor. Movies about interiority, on the other hand, rarely work, whereas novels of consciousness comprise our must vibrant era of literary production. So what kind of story is the internet good at telling? Today is Friday, and we’re still figuring out the form. Won’t you prod at the constraints with me?

Let’s start with the most basic story of all: civil depositions. On paper, they’re boring. In movies, they only work if someone has been or is about to get murdered. But somehow the internet makes them come alive. The Angel Ben Gabriel sent me this New York Times dramatization of an infamous exchange from an Ohio case in which a county clerk refuses to acknowledge what a photocopier is. Behold:

The only way that could be better is with Peter Dinklage. When resources are limited, though, you go with what’s available. One thing that’s available now is Willie Nelson’s old tour bus, which you can buy from a man in Texas via Craigslist. To paraphrase Rod Stewart, every Craigslist ad tells a story. In addition to the rad mural on the side, this sweet baby gets seven miles to the gallon and almost certainly has some very dry, Mexican eighties weed hidden in it somewhere. Google Analytics tells me there are about a thousand of you, so if each of us pitches in $40, we can have a Combat! bus. Please include an additional $1800 for gas.

The internet makes everything cheaper for everyone, through crowdsourcing and/or various technological advances that the pre-digital age called “stealing.” In a recent interview with Quartz, Steve Albini opined that the internet has finally solved the problem with music. Twenty years ago, Albini wrote an infamous essay for The Baffler called The Problem With Music, which characterized the recording industry as a pernicious scheme that overcharged fans and shortchanged artists in order to enrich various middlemen. It’s a classic. Thanks to the internet, Albini says now, bands don’t need labels to record and distribute their music. They kind of need labels for promotion, but not nearly as much now that Spotify, Pandora and one million blogs are introducing people to new music. Weirdly, almost all of Albini’s complaints about the industry have been solved by a new distribution algorithm.

Of course, millions of people still get all their music for free, and people getting stuff for free is almost always a sign that something is going wrong. Parents in Idaho successfully removed Sherman Alexie’s The Absolutely True Diary of a Part-Time Indian from the reading list at their local middle school, but they couldn’t stop a bookstore from crowd-funding 350 copies of the book for kids who wanted to read it anyway. When student Brady Kissel started distributing them at World Book Night, parents called the police. It turns out that it is not illegal to give free books to kids, though. “Someone [was] concerned about teenagers picking up a copy of the book without having a parent’s permission,” police told radio station KBOI. That parent meant to say “without having my permission.” Also, Sherman Alexie is an Indian?

I think Toughest Indian in the World is great, but in my opinion Alexie has gone on to become one of the most overrated writers in America. Dividing the world into broad categories of over- and underrated is really satisfying. The line basically runs through anyone who is rated slightly higher than me. Exception: Action Bronson. He remains criminally underrated. To wit:

Meanwhile, on the overrated side, we have Olympic fencers. I thought they were really good at swordplay, but it turns out they’re only very good. Watch for the surprise ending when they fight 50 guys:

A book of that fencing match would suck—sorry, Alexandre Dumas. A TV show about it would be pretty boring. But a seven-minute video? Delightful. You’ve got to know your medium.