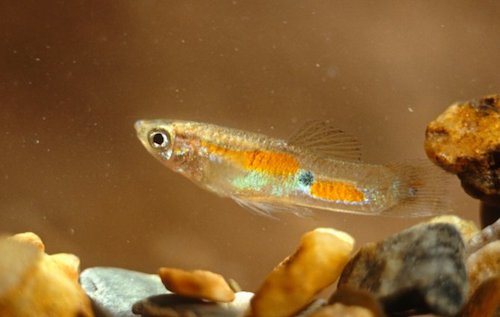 Pleiotropy is the scientific term for when a single gene produces two unrelated effects. For example, male guppies like the one pictured above tend to be orange and have that spot on their tale—possibly because that color and pattern are sexually attractive to females, but mostly because they look like a piece of fruit. Props for the link to my girlfriend Lucretia, who can read and understand scientific articles much better than me. Nature has made wild male guppies orange not because it’s useful or sexy, but because breeding females mistake them for food. Today is Friday, and cause precedes motive in such a way that sense comes only after effect. Won’t you explore some terrifying coincidences with me?

Here’s an analogical pleiotropy for you: China keeps its users behind what is colloquially known as the Great Firewall, presumably to keep Chinese people from learning about democracy and 4chan. On Tuesday, DNS errors in the administration of the firewall routed nearly all of the country’s internet traffic to web addresses registered to a nondescript house in Wyoming, which turns out to be the former headquarters of a company called Wyoming Corporate Services. As its transparent name suggests, Wyoming Corporate Services  “helps clients anywhere in the world create companies on paper and is designated to receive lawsuits on their behalf.” Essentially, it’s a shell for shady sub-businesses, including that of a jailed former prime minister of Ukraine and a company that sold “counterfeit truck parts” to the US government. And now, thanks to China, Wyoming Corporate Services is famous.

Meanwhile, the fruit that makes the guppies fuck has fallen in Ravalli County. Embattled treasurer Valerie Stamey has been placed on administrative leave while the county attorney’s office tries to figure out just what is going on in her office. Probably, what’s going on is that county commissioners appointed a precinct captain who was utterly unqualified to run an accounting office. Maybe, though—just maybe—Stamey’s accusations of corruption are true, and this beautiful story will go on forever. At least we might find out why she is scared of computers.

Don’t even ask me to unpack the forces in sport, telecommunications and American race culture that yielded this healthy eating PSA in which the First Lady photobombs, dunks and then mean-mugs. Just watch it and fall in love with Michelle Obama all over again:

Maybe I’m underestimating the celebritization of the presidency, but we are not likely to get a First Lady this good ever again. Look at her mean mug! She is briefly, actually scary for a second. It’s better as a silent GIF. I’m presuming that Barack Obama married for her intelligence and competence and also because she is at least two standard deviations better looking than he is, and the mean-mugging is an unrelated bonus. Pleiotropy!

Now I’m going to make you sad. I don’t want to shape your judgment before you listen, but this is the new Hold Steady track that McMackin sent me. On the foreboding side, he starts with the Cityscape Skins. Beware the post-hiatus comeback that starts with an allusion to earlier work. Also, you must not put reverb on a double-tracked vocal. Maybe I’m just in a crotchety mood, or maybe the Hold Steady has released the first track they finished rather than, you know, the best one. But overproduction, absence of hooks, aggressive vocal effects: I call Chinese Democracy.

Not that a reverb on a double chorus always wrecks it. Case in point:

And just because the internet is a wonderful resource, you can also watch this. Who knows what unrelated effect this meme will give you?

Somebody get this lady a frizzled chicken.