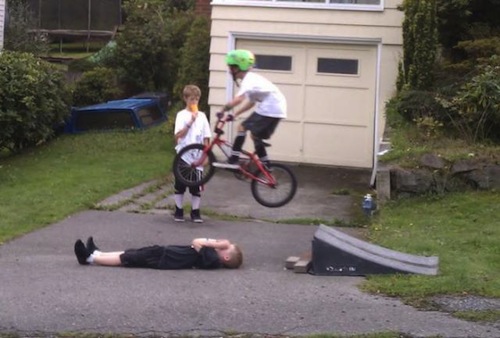 I don’t want to be a Negative Nancy, but the democratic experiment is pretty much over. It worked really good when we were yeoman farmers, but now that we’re VJs and customer service team leads, it sucks. Our politics is a shrill argument over whether the current crop of American rich people should be our last, and our electorate is voting values. It’s plutocracy time, now. Corporations can spend unlimited money on political ads; taxes are at an all-time low as deficits reach an all-time high; Congress is talking entitlement reform three years into a recession, and we’ve found a way to blame the President for hurricanes. America flew high once, but now the flyers must smash the nutsacks of those who facilitated their experiment. It’s called the other shoe, and the nation’s rich are dropping it with alacrity. Won’t you stare mutely eating a popsicle with me?

Let us begin with the last voice you hear as the raft goes over the waterfall: John Huntsman, who again made what passes for sense among current GOP candidates and again was booed loudly. Are you ready for his crazy pinko jibber-jabber?

As president, I wouldn’t hesitate to call on a sacrifice from all of our people, even those at the very highest end of the income spectrum.

That means rich people, and that could be construed to mean higher taxes! This is the worst gaffe he’s made since he said global warming might be real. John Huntsman is currently polling between one and two percent, and also US News & World Report’s website looks like it was made in a Russian basement,  but that’s not what I want to talk about here. I want to talk about how singularly depressing The Hill’s comment section is. If our founding fathers had had access to The Hill comments section, the right to vote would be limited to active members of the Supreme Court.

Republican candidates who won’t be dogsitting during the New Hampshire primary know that you can’t raise taxes one cent, even on people to whom $2,500 is, like, one cent. What you can do is get those people who aren’t paying taxes at all. Our very same John Huntsman has publicly agreed with Rick Perry, who said that “we’re dismayed at the injustice that nearly half of all Americans don’t even pay any income tax.” Friendly mummy Michele Bachmann concurs, saying:

Part of the problem is today, only 53 percent pay any federal income tax at all; 47 percent pay nothing. We need to broaden the base so that everybody pays something, even if it’s a dollar. Everyone should pay something, because we all benefit.

So they’re dead set against any taxes on people with jobs, even to get spending cuts at a ten to one ratio, but children, seniors on fixed incomes, and people who don’t make enough money to qualify for the income tax need to pony the fuck up. Those of you who know me know this factoid is my least favorite political meme. “Don’t pay any federal income tax” is frequently heard as “don’t get money taken out of their paychecks,” when in reality Bachmann’s 47% who “pay nothing” still pay FICA and other payroll taxes. You know why they don’t pay income tax? Because they’re too poor. You know, like the way rich people pay less and less income tax because they’re too rich.

American politics runs on the engine of free speech, and now that money is speech, people with more money can speak more freely. We live in the age of the SuperPAC, those organizations that can spend unlimited quantities of money from anonymous donors to spread whatever message they see fit. Don’t worry, though—it’s not propaganda, except for what Stephen Colbert’s SuperPAC is doing. That’s definitely propaganda, and it points out what our Supreme Court’s commitment to corporate personhood—the kind of person who never dies and has like 1000 times the money of a normal person but no conscience—might do to electoral politics. I’m not saying that the will of the people has been washed out of American discourse by a flood of corporate money. But every serious Republican candidate did just say we should consider taxing more poor people.

At least they cannot take away our quirky literary websites. Intro to Creative Writing teachers looking for a handout on exposition should consider Andy Kadin’s “Twelfth Time’s a Charm,” which tells us exactly as much as we need to know. “You can judge me,” says our undaunted contestant after his eleventh attempt, “or you can see how powerful shame is as an accelerant.” There is no efficiency like joke efficiency, as TS Eliot reminded us. “Like the old vaudevillian,” he said of his approach to poetry, “I am interested in that precision which creates movement.”

While we are cleansing our palates, let us also consider that synthesized bass line which creates movement. Mad props to Jacek and Miracle Mike Sebba for today’s jam, from the Handsome Furs excellent Sound Kapital album.