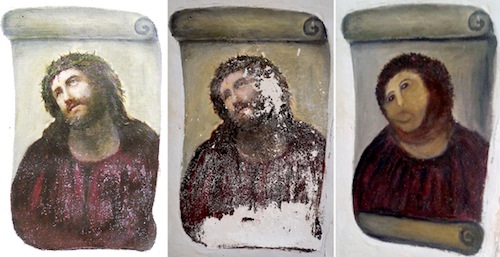 The three images above are of the 19th-century fresco “Ecce Homo” by Elias Garcia Martinez. The first is the original, the second is a version damaged by moisture, and the third is the botched “restoration” performed by 80 year-old Cecilia Giminez. Dueña Giminez is not a professional art restorer. She was trying to fix the fresco, which was one of her favorites, but it got out of hand. Authorities disagree on whether she did it with permission or what. If you would like to understand the problem of others, take a look at Ecce Bigfoot up there. A nice old Spanish lady who loves Jesus did that. You can’t be mad at her. All you can do is keep trying.

And I try—oh my god, do I try. I try all the time in this institution, but sometimes it feels like the whole thing is verkakte. That’s the argument The Homeless Adjunct makes in this scathing indictment of the American university system. It’s long, but stick with it; once you get past the unlikely introductory contention that corporate America has deliberately sabotaged the intellectual class, he makes several good points. Whether we set it up on purpose or not, our present management of higher education impoverishes students and creates a permanent underclass of underpaid professors. And now that everyone should go to college, it costs five times what it did 30 years ago.

There’s the country we think we have, and there’s the country we do. The Onion has spent the whole week hammering Todd Akin, but their sharpest barb hooks us as much as him. America is the place where an obvious crazy and/or stupid man still has a shot at becoming one of our hundred most powerful lawmakers. One of my favorite Onion micro-genres is fake articles where all the events and facts are true. While we’re appreciating The Onion, let’s take a moment to enjoy the vast number of people who have mistaken their stories for true on Facebook.

Each one of those people gets to vote. The fun thing about living in a democracy is that you can think of the dumbest, most wrongheaded person you know, and remind yourself that his vote cancels out yours. Then again, a lot of dumb wrongheads don’t vote. It’s not hard to determine not only how dumb this country is, but also how much that might matter. Consider the precipitous decline in contact and cooperation with public opinion surveys over the last fifteen years. In 1997, the portion of households contacted by pollsters that yielded interviews hovered around 36 percent. Now it’s nine percent. Yet conventional wisdom holds that politicians are more sensitive to opinion polling than ever before. Based on those statistics, I have no idea how we know what the conventional wisdom is.

Life is daunting. We have to trying though, even when it all seems senseless—especially when it’s senseless; that is when we most need the order provided by willful human endeavor. I actually have a little video I use for inspiration:

Go forward as a force for justice.