First, the good news: Voting just shortly before bar close, the Senate has rejected a plan to undo the Affordable Care Act known as “skinny repeal.” The vote failed 49 to 51, forcing Majority Leader Mitch McConnell to pull his head angrily into his shell. The bad news is he’s still in there. I’m not sure what scheme he could come up with to repeal Obamacare now, though. The failure of last night’s bill suggests that Senate Republicans are not willing to repeal without a replacement plan in mind, and their party has yet to put forth any alternative to the ACA that is not odious. The belief they never will seems to be a serious obstacle to McConnell’s plans. According to the Times, “Before rolling out the new legislation, Senate leaders had to deal with a rebellion from Republican senators who demanded ironclad assurances that the legislation would never become law.” If that does not capture the conflict between politics and government in the contemporary Republican Party, I don’t know what does.

I don’t blame Republicans for this impasse, of course. I blame the American people. In this matter I agree with former Arkansas governor and future breakfast sausage pitchman Mike Huckabee, who took to Twitter to vent his frustration with last night’s vote. Behold: 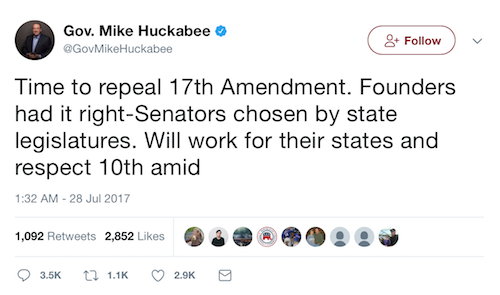 This is a bold stance for a populist. The Seventeenth Amendment, as we all remember from our incredibly expensive tutoring sessions, established the direct election of US senators. Previously, senators were appointed by the legislatures of their respective states, making the office a kind of currency for graft. Direct election was a major goal of the populist movement of the late 19th and early 20th centuries, which looked to Washington to curtail the power of the railroads, banks, and trusts whose wealth had thoroughly corrupted government at the state level. But whatever. Why should a man who titled his book God, Guns, Grits & Gravy know anything about the history of rural populism?

Frustration is not just a redneck issue, though. It bridges the cultural divide. Huckabee is big, folksy, and mad at a constitutional amendment we passed 100 years ago. Anthony Scaramucci is small, urban, and mad at people he started working with last week. Perhaps you read of his phone conversation with Ryan Lizza, in which he accused Steve Bannon of trying to suck his own cock1 and claimed that Reince Priebus was illegally leaking to the press. In an attempt to convince Lizza to reveal his sources, the Mooch threatened to fire the entire White House communications staff. That seems shortsighted, both as a threat and as a comms strategy. It was a disappointing play, because I thought of Scaramucci as a lovable scoundrel: the slick manipulator to Sean Spicer’s halting buffoon. Then I saw this video:

You know you occupy a certain class when you view cable providers and commercial air travel as triumphs of the free market. But look how Italian! He does the gestures and the huffing and everything, just like Donald Trump but not as though it were the result of decades of affectation. The Mooch seems like a pretty bad person, and potentially dumb, but I like watching him. RIP Gymnast Spicer.

Before you riddle me with bullets at a toll booth, I want to say that not all Italians are hooting crusaders against autofellatio. They can do anything a white person can, including run a frozen yogurt place. This video of Joe Wengert’s “Girardi’s Frozen Yogurt” is a master class in how to build a comic monologue, from the mounting emotional investment to the eventual convergence of non sequiturs. And he actually makes a catchphrase work:

I’d just like to point out that this performance occurred at Comedy Death Ray, a project of my genius friends. Just by reading this blog, you become more likely to succeed in some creative endeavor in the future. Take it from me, an isolated weirdo.