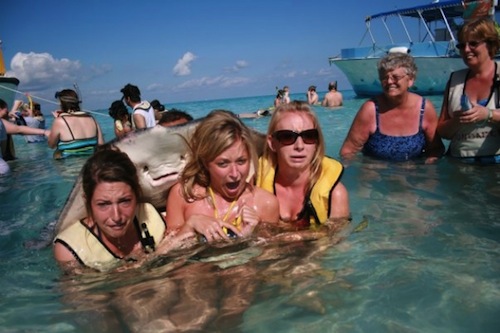 A sea creature meets some girls on vacation.

The picture above will be forever known as the Alleged Stingray Photobomb, and sadly it is posed. I should have known; something that beautiful doesn’t just happen, at least not to the likes of us. With the internet, as with all things, you’ll be happier if you lower your expectations. Today is Friday, and I’ll probably string together a half-assed narrative from uninteresting links before I show up late to yoga and fart. See how that works? If I can keep that idea firmly implanted in my head, anything short of disaster will feel like a pleasant surprise. The events you anticipate do not exist. There is only the world that happened, and now it is gone. Won’t you wish it a disappointed farewell with me?

First the fun: the presidential debate is Wednesday, and even the Romney campaign thinks he is going to lose. Props to Ben al-Fowlkes for the link. Beth Meyers, a senior adviser to Romney 2012, sent out a memo reminding everyone that “President Obama is a universally-acclaimed public speaker and has substantial debate experience under his belt.” Mitt Romney, on the other hand, is prone to doing stuff like this:

And Scarborough wept. Now for the opposite of fun: torture, which a growing number of Americans think is totally okay to do to somebody else. Props to The Cure for the link. A quarter of Americans now believe waterboarding is an acceptable method of interrogation, and 30% support chaining prisoners naked in cold rooms. Again, these numbers reflect attitudes toward torture that happens to other people. Approximately 100% of Americans still object to being waterboarded/chained naked themselves, unless it’s sexy or whatever. Hypocrisy continues to poll low but win contests at the last minute.

It all depends on what you’re used to. Luke sent me this fascinating and problematic essay on growing up in Gangnam, the wealthy neighborhood/video set in Seoul. Poor irony—again you are trotted out to be used in all senses like a common harlot. I think Euny Hong means “self-awareness,” but her recollection of being beaten with a stick for making the minimum donation to the Peace Dam is something either way. That last paragraph, though, is an instance of writing too hard. How much happier would Hong have been if she’d just stayed with the stick thing?

Expectations are like shingles: you’re happier when they go away. You can buy that quote from me in a framed picture with a rowing scull on it, and while you wait for it to arrive, you can read about this weirdo’s search for an apartment in New York. The Times should rename its “The Hunt” series “Weirdo Journal” and be done with it. Alfredo Sosa-Velasco wanted to buy a simple studio, but he needed something close to the Metro North so he could commute to his teaching job in New Haven. We’ll pause to let that sink in. He also wanted a place that allowed cats, and he only wanted to put 10% down. Also, when he turned on the sink, gumdrops should come out. Perhaps the most horrifying aspect of the story of his search is that it worked, and now the Spanish language and lit professor is commuting to Connecticut from the Upper East Side. Meanwhile, a cat chased a dog into an ice cream factory, where they were both given jobs.

You think the world is one way, and then you see something that contravenes everything you though you knew and you’re like “oh, that’s right.” NBC is now developing a show called Edison, in which the inventor of the light bulb fights crime. Shocking yet somehow inevitable, right? It’s amazing how quickly the human mind can retroactively revise its expectations. The first time I read about this Edison thing is surprised me, but now I am ruefully jaded. What a difference a day makes. Also, why the hell would you make any other videos about Edison when this already exists?

That’s it. There is nothing more to be done.