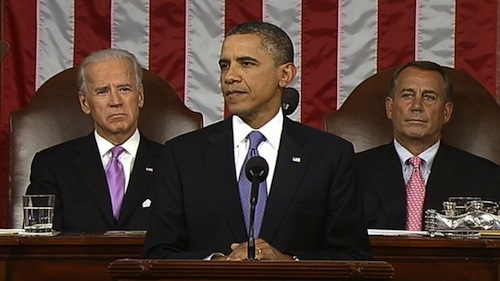 If you accidentally turned on football early, you might have seen President Obama rocking a joint session of Congress with his jobs speech last night. Here I should point out that I am not a trained economist. I am not even a gifted amateur. But regardless of whether the President’s jobs plan will actually create jobs, he finally put it in terms America needs to hear. Speaking of his, um, differences with the Republican party:

Maybe some of you have decided that those differences are so great that we can only resolve them at the ballot box. But know this: the next election is fourteen months away. And the people who sent us here—the people who hired us to work for them—they don’t have the luxury of waiting fourteen months.

Shit just got real. The rhetorical centerpiece of last night’s speech was “you should pass this bill right away.” It’s no Yes We Can—it’s not even a Win the Future—but it challenges the House and Senate in a way that foregrounds their intransigence. It also maybe acknowledged Obama’s willingness to be a one-term President. I’m still here for another year, he said like Dad when you are seventeen. The implicit threat was that, with less and less to lose, he is going to become a meaner adversary. And Boehner held his face completely motionless.

So Obama finally called out Congress, which I personally found satisfying. How effective it will be is anybody’s guess, especially since certain members of Congress are so flamboyantly dicks that calling out their behavior is like laughing at a clown. Take Jon Kyl (R–AZ), a man so committed to efficiency that he cut all silent letters from his name, yet who also announced that he would quit the debt reduction supercommittee if it even considered cuts to defense spending. Note that Kyl isn’t threatening to quit if the committee adopts spending cuts; he’ll quit if the other members even talk about them. “We’re not going there,” said Kyl, who had apparently been watching late-90s Fox. “Defense has given enough already.” Meanwhile, other members of his party are working to block the automatic defense cuts that will be enacted if the committee fails to find $1.2 trillion in savings by Thanksgiving. So defense has promised to give enough that it plans to renege on already.

But if there’s one thing every American knows, it’s that you should unquestioningly spend limitless amounts of our children’s money on defense. To say otherwise is basically to argue in favor of losing a war. Speaking of losing wars, the Times estimates that the United States has spent a total of $3.3 trillion dollars on 9/11 since 2001. Now that Osama Bin Laden’s skeleton is inside a big squid, we might consider what our actual, specific objectives are in the War On Terror that is definitely a war because it’s right in the name. Because it would be pretty cool if we had $3.3 trillion dollars right now. Jon Kyl could keep enjoying that supercommittee shrimp, for one thing, and maybe some single moms could go to college. Once we’re done building that plane that can take off straight up, of course.

America was not built on rocket planes and dead Saudi nationals. It was built on bold children who read exciting books,*

like Michael Chabon and The Phantom Tollbooth. I’m a big fan of Kavalier and Clay, but I’m starting to think that Chabon’s real métier is reminiscences of stuff he read as a kid. Thirty years from now, will we read similarly loving tributes to the Twilight series on our retino-screens? No, because everyone who reads children’s books now is an adult. But I’m sure the children of today will write fond recollections of various works of high-definition pornography.

Perhaps they will simply compose bittersweet tributes to a time when they could reach their genitals. According to a recent study in Lancet—presented via an Objective Lead Fail in this article from Business Insider—one out every two Americans will be obese by 2030. I reiterate: in 20 years, the numerical majority of Americans will be more than 30 pounds overweight. It should be noted that this statistic is based on the extremely questionable Body Mass Index, which compares weight to height without taking into account muscle density, cardiovascular fitness and other indicators of health. But the fact remains that Americans are getting steadily heavier without getting measurably taller, and I don’t think it’s because we’re all developing the bodies of Greco-Roman wrestlers. If you want to get scared, scroll down and look at the obesity map from 1990. Guess what got invented in the nineties?

If you said “the phrase don’t go there,” you’re right, but I was thinking of the internet. It’s how I spend six to ten hours a day sitting in a chair, although I’m 5’11” and 142 pounds, so the BMI is worried about me for other reasons. But as much as the internet giveth in lower back fat, it also taketh away in boredom. I was originally going to post one of the Dave Chappelle sketches in the “When Keeping It Real Goes Wrong” series, but those are not nearly as funny as I remember. This, though, stands the test of time: