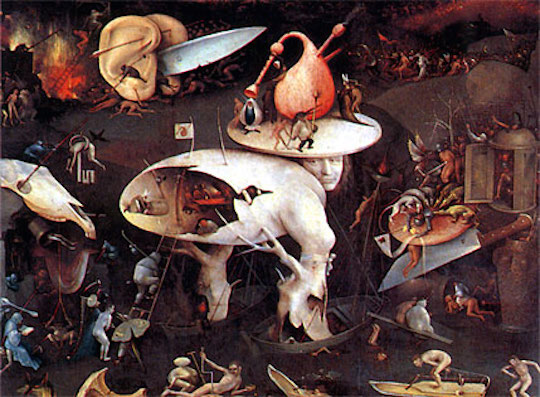 I will never get tired of using Heironymus Bosch images in posts, which is good because A) there are a lot of them, and B) they are the art our time demands. That’s totally what communication on the internet looks like: wounded ears with knives between them, arrows shot through the dead, people living inside a smug burgher’s butt.1 It’s awesome that we’ve invented the largest, fastest, more democratic communications medium in the history of humankind, and people spend hours a day looking at it, usually on their phones, often during brunch. If only it were just as fast but a little more considered, or just as democratic but a little less vulgar. Today is Friday, and popular discourse is good, but there is no good popular discourse. Won’t you look out over the plebes with me?

First, the good news: Donald Trump led the Republican field with support from 40% of 3500 registered voters polled last weekend. The bad news is that this report comes to us from One America News Network, and here’s the lead:

Starting your news story by saying you are a credible source for news is like starting your wedding vows by saying you are not fucking anybody else. Maybe just let that be understood. Also, put the comma inside the quotation marks, and don’t use “amazing” in your credible news writing. All that said, maybe I’m glad I read this story on One America News, since I can’t decide whether I want it to be true or not.

Meanwhile, in events that upset the other half of America, Cornel West has endorsed Bernie Sanders for president. “I endorse Brother @BernieSanders because he is a long-distance runner with integrity in the struggle for justice for over 50 years,” West said on Twitter. He went on to add, “Bernie Sanders is the jazz, that high white noise, the cosmic bebop which moves brothers and sisters to break their tools, to put it down for the masters like Coltrane did, and Flaubert.” West then excused himself for the next 20 minutes, saying he needed to write a book.

Beware exciting hoodoo in all its forms. Aaron Bady serves up a cold cup of coffee at the New Inquiry with this examination of where the Duke Fun Home story came from. Basically, dozens of national outlets ripped off a college newspaper. They didn’t plagiarize, exactly, but most of what they added were exaggerations of scale. The original objection to reading Fun Home came from a couple of students on a closed Facebook group. It was not strictly news. But after it had been rewritten a few dozen times:

[S]ince none of the media that have picked up the story have any new reporting to add—other than getting a few reaction quotes here and there and/or adding some moralistic commentary—they tend to re-frame what the student paper wrote in a more sensationalist vein. It becomes less of a Duke story, and more of a “College Students” story.

Thus do a handful of querulous students become a whole national trend. I bit, too, although I’d like to think I offered something besides sensationalistic repackaging. But maybe I just muddled the line between commentary and news.

That’s easy to do. Consider this Wonkette story about the Oath Keepers’ intercession in a mining dispute in Lincoln, Montana (which I wrote about for the Indy.) Our Rebecca Schoenkopf transcended the limits of her colleagues by actually going to Lincoln and talking to the Oath Keepers, but then she completely blew it. For some reason, she brought her husband and baby to the interview with her, which is not super professional. Surprisingly, that did not upset the Oath Keepers, but telling them right off the bat that she was a liberal did. From there out, they refuse to talk to her. With none of her questions answered, Schoenkopf is forced to write sentences like this:

…George Kornec and Phil Nappo have a mining claim on federal land; they’ve put up a garage and a fence, and the dastardly government is pushing its weight around and being a big bully and being really terrible and stuff by telling Kornec and Nappo to take them down.

Ah, derisive mockery: the soul of good reporting. For a brief moment, the internet offered the promise of citizen journalism. Then it joined the non-virtual world in a contest to just say whatever. On a related note, former state legislator Joel Boniek called the Montana Commissioner of Political Practices and District Judge Greg Pinski “frauds” after Pinski fined him $54,000 for campaign finance violations. Boniek offered no defense to charges that he accepted and failed to report $9,000 in free attack mailers from Direct Mail and Communications, Inc., now understood to be the same entity as vanishing illegal 501(c)4 Western Traditions Partnership. Boniek instead blamed his campaign manager. He also accused Motl and Pinski of conspiring against him with the Montana Supreme Court:

This is what people get in this society for standing up to justice. This is all politics. They don’t like people like me who stand up for freedom and small government. It’s not about justice, it’s about getting Joel Boniek.

I understand how Joel Boniek could see it that way. Commissioner of Political Practices should be a non-partisan office. Until it is, the Bonieks of the state will always have a ready excuse. I can’t stay mad at him, though. From Trump to WTP, I just don’t have it in me to loathe a scoundrel. If only some song expressed my dilemma. Ideally, it would be a cover.