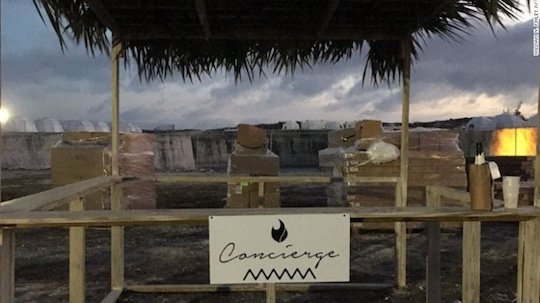 From Fyre Festival, a $12,000 concert in the Bahamas that is not going as planned

Experts from Dave Barry to Naven R. Johnson’s grandmother agree that it is better to be rich and healthy than poor and sick. But is being rich really such a sweet deal? Wages have stagnated for the last four decades as corporate profits climbed to all-time highs, so it seems like now is a great time to own things. But that’s a narrow perspective. If you weren’t so wrapped up in working all day, you’d see that the rich are suffering terribly. They never get any sympathy for it, either, what with frothy-mouthed socialism being so popular lately. All this talk about fairness and equality serves only to divide us. Today is Friday, and we all bleed the same shade of Nantucket red. Won’t you pity the masters with me?

First, the good news: Donald Trump is finally starting to understand how hard it is to work for a living. The bad news is he’s working as President of the United States. In what I can only describe as a jackpot interview scenario, he told Reuters he thought the presidency would be easier than his old life running the family business:

You should quit, bro. It’s not as though these comments have finally given us a clue that Trump can be kind of an egotist. But it does take a special person to have assumed that his job—the only job he has ever had, which he inherited from his wealthy father—was harder than running the United States government. He also says he misses driving. This is just my own anecdotal experience talking, but beware the New Yorker who loves to drive.

Meanwhile, New Yorkers who love to give low ratings to Uber drivers are suffering on social media at the Fyre Festival. The Fyre Festival was supposed to be a multi-day, luxury concert event in the Bahamas. Attendees paid up to $12,000 for packages that included travel by private jet, lodging, food and live performances. Then they got there. The lodging turned out to be a partially erected tent city; the food was cheese sandwiches, and everyone’s luggage appears to have been thrown out of a shipping container in the night. Blink 182 has pulled out of its scheduled performance, but on the plus side, there are a lot of feral dogs. My favorite aspect of the social media dispatches from this debacle are the usernames. I’m pretty sure this is the worst thing that ever happened to William N. Finley IV.

It looks like Willam Finley III  isn’t having a great week, either. If you want to understand how the widening gap between workers and the investor class makes American consensus impossible, check out this story about how American Airlines stockholders are upset with the company for raising the pay of pilots and flight attendants. You would think that giving everyone a raise would be good news. But if you own stock in American, you want everyone except for you to get paid as little as possible. And you’re kind of whiny about it, if Citi analyst Kevin Crissey is any indication. I quote the LA Times:

“This is frustrating. Labor is being paid first again. Shareholders get leftovers,” Citi analyst Kevin Crissey wrote in a note to clients. Investors showed their displeasure by sending American Airlines Group Inc.’s stock down 5.2% to $43.98 on Thursday.

Crissey’s right: this system seems totally unfair. Once again, American Airlines employees get paid first, and only the “leftovers”—which economists call “profits”—go to shareholders. What kind of incentives have we developed when the news that a company will pay its workers more sends stock prices down five percent? How is this system not fundamentally opposed to the wellbeing of the vast majority of Americans?

I am not a Marxist. There’s something pinched and depressing about a philosophy that reduces human experience to purely material concerns. But I do think it’s harder to work than it is to own things, and people should be compensated accordingly. This attitude puts me far to the left of the Democratic candidate for president last year, over in the pinko section with such historical leftists as Dwight Eisenhower. As a voter, my choice is pretty much between the openly racist party of the rich and the party of the rich that’s committed to a diverse ruling class. The Democrats have abandoned the broad concerns of people who work for a living, preferring to focus on representative individuals. Here’s Asad Haider in Seattle Weekly:

One thing that happened was that a governmental system which was once defined by the exclusion of people of color on the basis of legal forms of white supremacy, now suddenly was altered by the successes of the Civil Rights movement. It became possible to have a ruling class that incorporated people of color. In that context, taking away the structural challenge that was posed by the Civil Rights movement and Black Power movement, suppressing that in favor of a kind of politics that is entirely about the recognition of individuals abstracted from their class positions, that became a very convenient position for members of the ruling class to take.

Haider does a fantastic job in this interview of rejecting the false dichotomy of contemporary liberalism. Democrats don’t have to choose between identity politics and class politics. They need to choose between working people and the investor class. Right now we have two parties representing the interests of investors, with one of them doing a much better job of hoodwinking the working class.

Give it another few decades, and it won’t be only high school graduates who are just getting by. The professional class works for a living, too. Everyone laments the struggle of the coal miner, but what about our long-suffering directors of music videos?

Props to Ben al-Fowlkes for the link. This video is a tonic to anyone who has worked in production. Also, I want Young Thug to stay alive for at least three more albums. Fingers crossed.