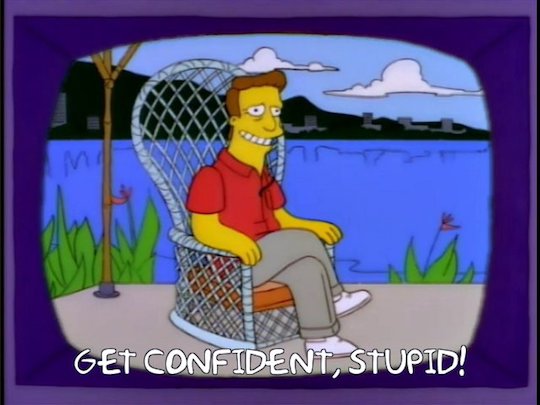 You know what the problem is with this country? No one has the courage of their convictions anymore. We’ve suffered a nationwide crisis of confidence, and now Americans are afraid to go their own way and live as devil-may-care visionaries. People are so concerned with fair play and rules of decorum that they aren’t willing to stand up for what they believe is right. We have all become hobbled by our sense of ethics and the way things ought to be done, afraid to act because we might be wrong. Also, the sun makes us colder each morning, and birds crawl silently along the ground. Today is Friday, and everyone in America is extraordinarily confident. Won’t you explore that classic mark of genius with me?

First, the good news: Literally no good news emerged from anywhere in the world this week, so we can finally stop thrilling to the tease of that joyless harlot, hope. The bad news is that the White House has ordered federal agencies to stop responding to oversight requests from congressional Democrats. That information might be used to damage the president. I suppose “information” that revealed what the federal government is “doing” might be a necessary check on the power of the president in other administrations, but this is Donald Trump we’re talking about. He’s making America great again. And critics who argue that Republicans shouldn’t do this are ignoring the fact that they totally can. I quote a White House spokesperson:

You have Republicans leading the House, the Senate and the White House. I don’t think you’d have the Democrats responding to every minority member request if they were in the same position.

Ah yes, the Mugger’s Paradox: If you had a gun, you’d demand I hand over my money. When you think about it that way, I guess it seems fair. Meanwhile, at the Washington Examiner, White House Office of Management Director and artificially aged boy Mick Mulvaney opines that the day of the Congressional Budget Office “has probably come and gone.” On a related note, Mulvaney was displeased with the score that the CBO gave to the House health care bill, which it estimated would lead to 23 million Americans losing their insurance. Here’s his argument for why that’s biased:

We always talk about it as the nonpartisan Congressional Budget Office. Given the authority that that has, is it really feasible to think of that as a nonpartisan organization?

Yeah—if it’s unbiased, why does it have authority? If the CBO were really a nonpartisan agency, the GOP would run it along with anything else. Mulvaney goes on to question the very possibility of objective knowledge, suggesting that groups like The Heritage Foundation and The Brooking Institute do their own research about the impact of prospective laws, and “then [legislators] would do it and if it works, they would get re-elected and if it doesn’t, they don’t.”

It’s a perfect system, and it’s all based on the supreme authority of winning. First you win, then you do whatever, and if you win again, what you did was right. Speaking of making right—I can’t remember what does it, exactly, but I remember it rhymes—a Portland Republican suggested on Monday that the GOP deploy its own security forces. Students of history might join me in a hearty “come on, son.” Even Hitler came to regret the Brownshirts. But Multnomah County Republican Party Chair James Buchal has, uh, not heard of that. Quote:

I am sort of evolving to the point where I think that it is appropriate for Republicans to continue to go out there, and if they need to have a security force protecting them, that’s an appropriate thing too…Because there are now belligerent, unstable people who are convinced that Republicans are like Nazis.

Where would they ever get that idea? Between the paramilitary organizations and the cult of personality built around a nationalistic, anti-intellectual leader, you just can’t find any similarities. But some people just see what they want to see, I guess.

In other news, Dr. Keith Ablow has released the second installment of his series on “Trumping your life: How to be a better, stronger person by being more like the president.” I think that no matter how you feel about the president’s agenda, we can all agree that his personality is beyond reproach. Acting like that would definitely work for people who are not rich. Maybe the best thing about Ablow’s rules is that they lay out a recipe for success if you are a genius, but if you have any foibles, they work just as well as a blueprint for disaster. For example, “Assume you will encounter increasing resistance as you pursue big and worthy goals.” It’s true that people will always question you when you try to change the world for the better. Of course, they will also question you when what you’re doing is obviously stupid and you’re making a big mistake. It’s a real catch-22. You should probably take criticism as a sign that you’re on the right track, though, just in case you are a genius.