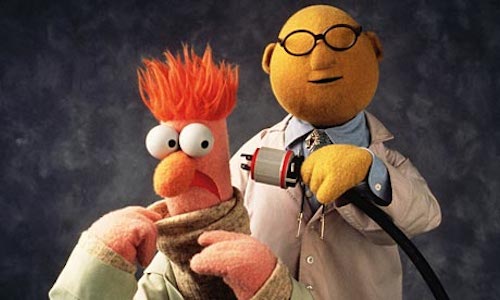 Here’s how the scale of human intelligence works: anyone dumber than me is an idiot. From your/you’re to minor driving mistakes to this guy, I can’t believe how stupid people are. Conversely, everyone even a little bit smarter than me must be some kind of genius. Can you imagine the sort of mind that knows something you don’t? Of course not. That’s the whole problem. Today is Friday, and the scope of ingenuity is less a spectrum than a binary. Won’t you fill in the ones and zeros with me?

First, some alarming news from my friend Justin, via the other Independent: Sarah Palin predicted the Russian invasion of Ukraine in 2008. At the time, that theory seemed idiotic, since Russia and Ukraine were allies and since it was a sound that emanated from the mouth of Sarah Palin. But now, in the cold light of history, we must admit that she was right. My favorite of the Independent article is how it, like me, assumes that Palin was right by coincidence. Surely there can be no truth to her claim that she was victimized by hostile journalists. As geopolitical upheavals go, that would be a more significant change to my world than a Crimean secession.

Lest you think it’s been a week of victories for contemporary conservatism, however, I am pleased to report that Iowa Secretary of State and Valley High School alumnus Matt Schultz has seen his voter registration scheme struck down in Polk County court. The Register describes Schultz as “a Republican who has built his reputation…on ballot security issues,” which is a nice way of saying he’s a hack. Back when we were all getting banned from his Facebook page, I asked him how many cases of voter fraud were reported in Iowa in 2008. His response was to ban me from his Facebook page.

A visionary is never understood in his own time, though. While Schultz was busy converting election laws to demographic strategies, Satoshi Nakamoto was inventing Bitcoin. Of course, that couldn’t be his real name, unless it was. Leah McGrath Goodman has found the elusive Satoshi Nakamoto and completely failed to get an interview with him. She did find some interesting biographical information from friends and family, but she buries it under 600 words telling you how hard it was to find him, plus one obviously made-up quote from a cop. Congratulations on finding the inventor of Bitcoin and also writing the most self-important piece of journalism in recent memory.

That’s the thing about personal experience: its interest is incommensurable, because you can’t imagine it from the perspective of any experience other than your own. That’s also why we have fact-checking. Miracle Mike Sebba sent me this editorial about the SAT with the subject line “rage,” and that about sums it up. Jennifer Finney Boylan is wrong when she says you can only take the SAT once, and she is short-sighted when she complains that making the SAT more like high school curricula only means it should be abandoned in favor of high school grades. And she manages this fatuous comparison:

Although, in the years since I took the test in the mid-’70s, I’ve sometimes wondered if knowing how to braid hair was actually of more practical use to me as an English major than the quadratic equation.

The quadratic equation is not now, nor has it ever been, part of the material covered on the SAT. A lot of people make a living understanding that test and its relation to college admissions. But do they have as many headshots as Professor Boylan?

The world is so different from what we imagine. For example:

The explainer video is not as fun. It never is.