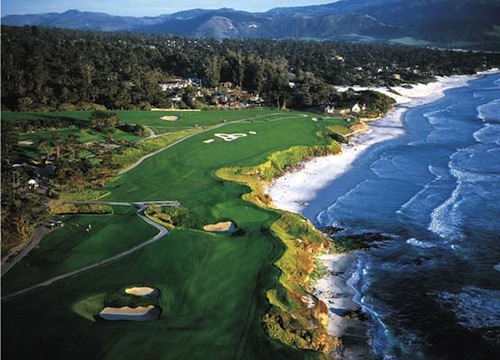 Pebble Beach golf course. I can't believe it took two years for that one to occur to me.

It is suddenly, finally summer in Missoula, and after three consecutive days of 65+ temperatures I can’t remember there ever having been a winter.*

Here we find yet another metaphor for the present age, when the internet—which, as the New York Times keeps reminding me, is changing everything—allows us to live in customized mental landscapes whose consistency elides everything else. From my perspective, this is awesome. I get to sit in my apartment, watching Frisky Dingo and reading about existentialism, weird punk bands and money policy, and rarely am I reminded of the existence of, say, Dave & Buster’s. Everyone once in a while, though, one catches a glimpse of another world, similar to one’s own yet horrifyingly different, and like a character in an HP Lovecraft story, one  has no choice but to go insane. Fortunately, tomorrow is Saturday. In consideration of a weekend in which you hopefully won’t have to judge true from false or right from wrong, Combat! presents glimpses of worlds baffling in their grotesquerie. You may just find the view…unsettling.

First, news from everybody’s favorite alternate universe: North Korea. In the first international sporting event televised live in the country, the World Cup team of the Democratic People’s Republic lost 7-0 to Portugal. Slate, which is working to win back my trust after a series of articles designed around obvious answers to rhetorical questions, ran this great speculation on how the country’s state-run media would cover the game. Here’s a quote from the Central News Agency’s coverage of the previous game against Brazil: “At about the 88th minute of the match Jong Tae Se headed the ball before passing it to Ji Yun Nam who powerfully kicked it into the rival’s goalmouth, scoring a goal.” Take that, rival goalmouth. While there has been some speculation that certain members of the DPRK team will be executed after Monday’s loss, the consensus of the international press is that they probably won’t.

Don’t watch this video if you’ve just had surgery to remove the confusion lines from around your mouth:

That’s Adam Hood, a man who used to be gay and is now, thanks to the curative power of god/uncontrollable self-loathing, totally, completely, gooch-crackingly straight. Don’t worry: commenters on YouTube have already pointed out his ascot. While I appreciate the honesty implicit in Hood’s insistence that homosexuality is a sin because the Bible says it is, he seems to maybe not be bringing the same clear-eyed inquiry to whether it’s a choice. Also, if you are Adam Hood’s father—I assume either Lance or Bruce Hood—call home.

The power of the inquisitive mind must know no limits, even if the conclusions at which it arrives prove unpleasant. Perhaps that’s why Robin of Berkeley, a psychotherapist writing for the ironically named American Thinker, took it upon herself to diagnose the President’s obvious mental illness. Since she’s a trained mental health professional, Robin acknowledges that an assessment at such long range “presents a serious diagnostic challenge,” since “we know so little about the facts of his life. Still, she is able to discern that the President probably has a narcissistic personality disorder, complicated by a possible head injury and years of drug abuse. He also could have Asperger’s Syndrome, and—”while I can’t prove it”—it seems likely that his father sexually abused him. I’m all for the absolute freedom of the press, but do we still have libel laws in this country? If you have a second and you want to experience a concentrated burst of schadenfreude, check out some of Robin’s other work, including the masterfully enraging Why I Am Enlarging My Carbon Footprint.

That kind of talk—the President is a monomaniac, the US government has descended into tyranny, the lowest tax rate in ten years is an unsustainable burden—is, thankfully, confined to the fringes of American political discourse. By fringes, I of course mean Republican congressional candidates. The following video comes from Rick Barber, who A) is currently embroiled in a run-off for the Republican nomination for Alabama’s 2nd District, and B) has clearly learned something from Dale Peterson. Editor’s note: despite Barber’s earnest explanation to the reanimated corpse of George Washington, the IRS is not allowed to increase taxes.

I’m all for absolute freedom of speech, but do we still have sedition laws in this country? Gather your armies, you guys. You do have armies, right?