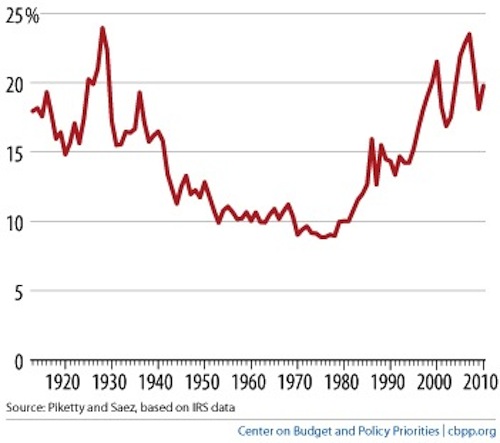 Graphs, graphs graphs! First of all, I don’t get punished for using a spectacularly uninteresting visual image for my header, because you are already looking at this page. All your hits are belong to us. Second, that image is actually totally interesting. Had I not cropped out the title, you would know that it plots the percentage of total US pre-tax income—including capital gains—garnered by the wealthiest one percent of earners. A lot of people have said that the interesting thing is its impressive upward trend right around 1980, when America began the long fight to make the Laffer Curve a legitimate conceptual instrument. I personally think the interesting thing is the locations of its two highest peaks, in 1929 and 2007, respectively. I’m not saying economics is a science, but maybe there’s some sort of principle at work there. It’s Friday, and today’s link roundup is all about weirdo economic phenomena, plus judo highlights and a book review. I’m not entirely stupid.

Let’s start with the basics: competition. The Times reports that on Avenue of the Americas*

in Midtown, two rival pizza sellers have forced each other down to 75 cents a slice. I hope you appreciate what a big deal that is. When I first moved to the city, the going special was two slices and a very small soda for three bucks, and that is as a beautiful dream now. Seventy-five cents a slice seems below the threshold of profit, a point that the owners of 2 Bros. and Bombay/6 Ave. Pizza take pains to emphasize. “We don’t sell pizza at 75 cents,” Eli Halali of 2 Bros. said. “But if they think they’re going to sit next to us and sell at 75 cents, they’ve got another think coming.” See, you thought you understood the ethnic dynamics of this pizza conflict, but you don’t. The economic dynamic is baffling, too. The two pizzerias are separated only by a stairwell; neither owner likes selling pizza for 75 cents or considers it sustainable, and neither has any plans to relent. Explain that, Adam Smith.

Conflict: it’s at the heart of any good story, whether between two pizzerias or a mollusk and a mean brain. I intend to read A. Lee Martinez’s Emperor Mollusk Versus The Sinister Brain, and in the meantime I have opinions about it. Our man Rowan Kaiser assures us it is pulp fiction, a species that has survived to the modern age only in romance and crime novels. Yet the cover and its presence in The Onion AV Club suggest that EMvSB is being marketed as literature. Which brings us to a tangentially economic question: is “literary” a genre of fiction and, if so, what are its generic hallmarks? I submit that the answer to the first question is “most definitely,” and the second is one for the comments section. I suspect, though, that the key lies in the intended consumer base and not the product.

Certain product economies exist for only one consumer, and that is messed up. Consider the Littoral Combat Ship, a new navy vessel that has been in production for a decade and maybe doesn’t work. Certain Washington functionaries and assorted members of Congress, including Representative Jo Bonner of Alabama, absolutely love it. Other people, including Pentagon weapons testers, say that the ship is “not expected to be survivable in a hostile combat environment.”  John McCain said the saga of the ship’s procurement has left him embarrassed as a “former Navy person.” But perhaps the most telling quote is this single-sentence paragraph from the second page of the Times report:

One ship still to be built will be named the Gabrielle Giffords, after the former Arizona congresswoman who was shot in Tucson last year.

That’s the idea that emerges from the process to tell you no one is in charge. We’re building this thing anyway, and then we’re going to load it up with high school graduates and see what happens.

Okay, now shut up and watch this judo highlight video:

The only person to ever straight-up punch me in jiu jitsu was this fellow we called Judo John, who came to his first class at Renzo Gracie Academy and immediately began telling us about his mastery of another system for fighting. I liked Judo John, because he was the only person in the room who knew less about jiu jitsu than I did, and I expressed my affection a few minutes later by putting him in a mounted collar choke. “Just tap,” I said helpfully, but Judo John did not believe. Instead he did that thing that certain people will do the first time they wind up in a choke, which is open his eyes really wide and then freak out and hit me with a right cross. Then we were surrounded by yelling Brazilians, who lost interest in pulling us apart as soon as they realized that I was moving ahead with my plan to choke the shit out of him, and everyone calmed right down once that was done. Later John invited me to this fight club he went to. I did not go, but one of the other guys from my class went and described it as “cardboard on the floor and shit.” The point of this story is that I always thought judo was bitches, but it turns out at the very highest levels of competition it’s pretty rad. That first arm bar never works, though.

Mike Sebba sent me this sweet jam, and history will vindicate him for it: