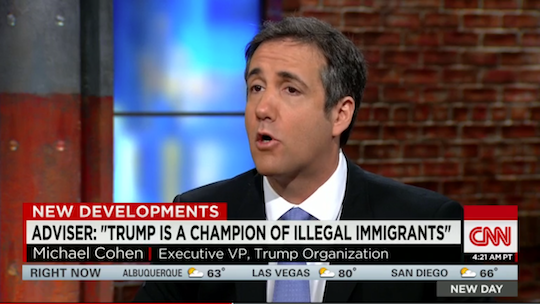 If Donald Trump lied any more often, he’d have to guard a door in a logic puzzle. He does not always lie. He’s not at the dry cleaners like, “I’m Marie of Roumania, and I’m here to pick up my dog.” But although he periodically speaks truth, he is so much more likely to disregard it that his defenders urge us not to take him literally—that is, as though his words had fixed meaning. Trump is a bullshitter. He might be the chief bullshitter of our bullshit age. So can you imagine being his lawyer? One pities such people. How much bullshit must Michael Cohen, Sheri Dillon, and the rest of Trump’s team of paid advocates wade through to convert his raw, jazz-style bullshit into something finished enough to bullshit a court of law? Today is Friday, and even the president needs fixers. Won’t you make this all go away with me?

First, the good news: Trump is going to file a financial disclosure with the Office of Government Ethics, voluntarily—even though he doesn’t have to—in June. The bad news is that his lawyer didn’t want him to sign it. The aforementioned Sheri Dillon tried to get OGE director Walter Shaub to agree that Trump did not have to certify his disclosure as true, but Shaub refused. In subsequent correspondence, Dillon continued to emphasize that Trump was under no obligation to file, even though he’s totally going to do it. I quote the AP:

Dillon also stressed in her letter, dated May 9, that Trump is under no obligation to file a financial disclosure this year and is doing so voluntarily. “President Trump welcomes the opportunity to provide this optional disclosure to the public, and hopes to file it shortly,” she wrote.

I can’t wait to do this thing I don’t have to do, and I hope to do it right away, although it’s optional. In other things that will never happen, longtime Trump attorney Michael Cohen admires his daughter’s “brains and beauty”—a proud father’s sentiment he expressed in the traditional way, with a photograph of her in bra and pantyhose. It was kind of off-putting, although it hardly merited the outrage it provoked. Certain scolds went so far as to accuse Cohen of lusting after his own daughter. But then, using the trained mind of an attorney, he took to Twitter and MADE IT MUCH WORSE: 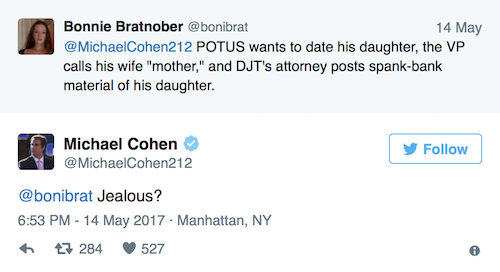 I feed on the jealousy of haters, whose spank banks lie empty for want of hot fam. Speaking of things getting worse, Rob Quist only has one week to go before the special election. That means only one more week of Tom Lutey publishing extremely damaging information about his finances in the newspaper. Today, we learn that four tenants in the Flathead have been writing rent checks to Bonni Quist for three years, even though the Quists reported no rental income on their tax returns. But that actually makes perfect sense, Quist says, because his daughter owns the place. Her mother transferred it to her, and she transferred it back, and then Bonni transferred it to her again, all in 2013. Here’s Lutey:

Flathead County property records show those transactions between mother and daughter occurred a few months after a foreclosure notice was filed against Rob and Bonni Quist to collect $348,214 in debt. The couple had missed several mortgage payments. Records indicate all property is currently in the clear.

This news emerged after a disgruntled tenant went to Lutey. What is it about him that attracts damning information regarding Quist’s background and financial records? It’s the kind of information that opposition researchers spend weeks digging up, and it just comes to him. I guess he has a nose for news.

Quist is suffering, but politics has always made martyrs of great men. It happened to the very first politician, Jesus. It happened to Jack Kennedy and Abe Lincoln and, uh, Bill McKinley. And now it’s happening to Don Trump—but way more than it happened to those other guys, because the media is totally unfair. In fact, “no politician in history” has been treated more unfairly than our current president, as he explained in a commencement speech.

So says the President of the United States, a billionaire who started as a humble millionaire but wisely parlayed his father’s political connections and a few million dollars in New York City real estate into a vast fortune, using only his wits and every form of unfairness known to man. Jesus Surfing Christ—is this how he thinks of himself? As a man who triumphed over unfairness? I could write 1200 words on this 90-second clip, so I will write no more. It’s just awesome that he’s delivering this speech to a bunch of new Coast Guard officers. Perhaps, when they find themselves under pressure and literally at sea, they will remember the character of Donald Trump.