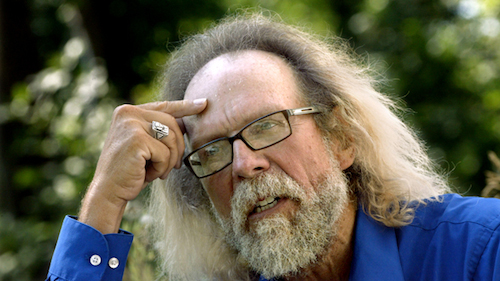 White supremacist Craig Cobb, who recently learned he is 14% black

“Virtue is its own reward,” says the man who does not want to reward you for anything. It’s the consolation prize of aphorisms, implying not even that things will get better later, but that you should be more grateful for the injustice underway now. No wonder virtue is unpopular. Stupidity, on the other hand—along with arrogance, bigotry and old-fashioned bossiness—is going like hotcakes. Fortunately, the converse of our old saw is true: stupidity is its own punishment. Today is Friday, and those who deny the facts on the ground inevitably will be corrected. It happens to all of us. Won’t you enjoy your comeuppance with me?

First, the good news: Craig Cobb, who has tried to start a whites-only community in Leith, North Dakota, discovered on a talk show that his genetic makeup is 14% sub-Saharan African. Oh, this modern world. I don’t mean to get into nominalism, but it’s almost as if distinct races were a 19th century idea with no referents among real people. Or, as Cobb put it to the Bismarck Tribune:

I had no idea, or I wouldn’t have gone and done that, and I still don’t believe it. I’ll find out with real science and get the whole DNA map.

Ah, real science: the science that confirms what you knew before science got involved. Enjoy seeing your plans undermined by the 14% of your genes that fundamentally don’t want to work, sucker.

The New Republic’s Julia Ioffe blames another proponent of real science, Jenny McCarthy, for the case of whooping cough she contracted at age 31. Pertussis infections have declined significantly since the 19th century, mostly because the developed world started vaccinating for it in 1940. Then the developed word developed epistemic relativism and, to paraphrase Isaac Asimov, my ignorance became as good as your knowledge. Then Jenny McCarthy got famous for having nice boobs and playing along with fart jokes. I’m sort of condensing history, here, but the next thing that happened was that vaccination against pertussis among California kindergarteners dropped to 91%, and they had a massive whooping cough outbreak. Cases of autism held steady.

Comeuppance is not always limited to those who need coming-up. In Texas, 90 year-old former Speaker of the House Jim Wright was denied a voter ID card after he failed to meet the state’s new requirements. As an elderly Democrat, Wright is living proof that the law is pretty much working as intended, if not as advertised. Also, if you would like to see how the public rhetoric of politicians differs now from Wright’s day, here’s his response:

Ah, for the days when the first rule of politics was “don’t say anything that isn’t true.” Now it’s “use state-level offices to selectively disenfranchise your opponents’ constituencies.” It’s practical advice, even if it isn’t catchy.

Meanwhile, in corporate authoritarianism, a US Airways flight from Philadelphia to Long Island was canceled after passengers launched a minor insurrection in support of a blind man being kicked off the plane for a dispute over his service dog. Flight attendants told Albert Rizzi his dog had to stay under the seat in front of him, per regulations. After the plane sat for an hour on the tarmac, Rizzi’s dog emerged to sit on his feet, and a flight attendant told him to put the dog back. At that point, according to US Airways, Rizzi “became disruptive and refused to comply.” Probably US Airways’ account is true, and a blind man turned into a total dick when confronted with the reasonable request that he make his dog stay under an airplane seat for an hour. Still, I have yet to encounter a reasonable authority that used the word “disruptive.”

We’re at the mercy of an increasingly officious airline industry, but at least we have planes. Every time I get down on America, I remember that virtually every other country in the world is much worse. To wit:

Props to Spencer for the link. That’s a good song, but it fails to convey America’s fundamental message: if you want to be pretty, you have to work, bitch:

Man, I want to edit out that bridge. But Britney knows what she’s doing, I guess.