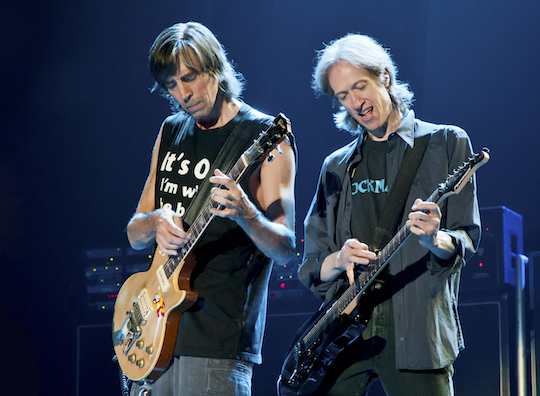 Boston or The Allman Brothers or some shit

I distinctly remember being sick of “More Than a Feeling” in high school. Why did we have to listen to a 20 year-old song every day? Even if we refused the possibility that any music recorded in the last two decades could be worth playing on the radio, I wondered, why play this one? It’s rhythmless and shrill; the chorus is weak, and the refrain compares the most abstract concept imaginable to…nothing. Hearing “More Than a Feeling” virtually every day on KGGO, at that time the only rock station in Des Moines, felt like a warning from an older generation that they would never relinquish culture, even if that meant culture had to stop. I imagined a man with a cigar at the radio station, angrily asking why we needed new music when “More Than a Feeling” was right here. Eventually these people would lay off, though. Surely, once “More Than a Feeling” was 40 years old, I would no longer hear it in car washes and burger joints. How little I knew. “More Than a Feeling” turned 40 last year, and it was the fifth-most played song across 25 classic rock radio stations in June.

That statistic comes from this post on FiveThirtyEight about classic rock and the algorithms that determine its playlist. The author, Walt Hickey, began his investigation after hearing Green Day on his local station and wondering how programmers determined when a song became classic rock. Hickey talked to Eric Wellman, the classic rock brand manager for Clear Channel, who said radio stations determine the canon by reasearching what songs classic rock fans like. Quote:

“The standard in the industry these days is an online music test or an auditorium music test where you just gather a sample and have them rate songs based on the hooks—the most familiar parts of the song—and you just get back a whole slew of data,” Wellman said. The stations find a cluster of people who like the music that makes up the core of classic rock, and then finds out what else they like. They like R.E.M.? Well, R.E.M. is now classic rock. “It’s really that simple,” Wellman said.

Once you start looking for horror in this paragraph, it really unfolds, like a prison where the inmates are running a secret prison. The fact that stations are conducting their audience research using the hooks—“the most familiar parts of the song,” as Wellman has it—explains why maddeningly recognizable tracks like “Dream On” and “Sharp Dressed Men” dominate playlists. You don’t have to pay much attention to music to recognize “You Shook Me All Night Long.” By making familiarity the operating principle of its playlists, classic rock guarantees its own stagnancy. A song becomes classic rock when people who prefer the most familiar songs in the world start to recognize it.

This method suggests that the short playlists and Kafkaesque consistency of classic rock are features, not bugs. What I experience as getting sick of “Sweet Emotion”—a song I loved when I was 13 that has become an almost physically painful symbol of moronic decadence—they experience as comforting familiarity. The goal of classic rock seems to be to never play anything you haven’t heard a million times before.

It’s weird, though, that this familiarity should stay centered on 1973 even unto the present day. If classic rock stations had been playing 40 year-old music in the nineties—jazz, I guess, or proto-rock from the doo wop era—would those songs be the canon of overplayed music today? The question, here, is whether there is something inherent in the noodling prog and pituitary blues-rock of the 1970s that makes it appeal to people who don’t listen to a lot of music, or if classic rock is a self-fulfilling prophecy.

If broadcasters construct their playlists around recognizability, perhaps the millions of listeners who love classic rock—or at least put it on without thinking about it—could have learned to recognize other songs instead. If that’s the case, classic rock is less a genre than a cadre: the people who have been trained to regard certain songs as “classic.” Clear Channel’s methodical search for the music they like may be an ouroboros, leading back to the playlist stations themselves created. Perhaps classic rock is not just an aesthetic hegemony forced upon us by corporate radio, but a prison in which those stations have arbitrarily confined themselves.

Maybe it didn’t have to be this way, is what I’m saying here. Regardless, this is the only good classic rock song: