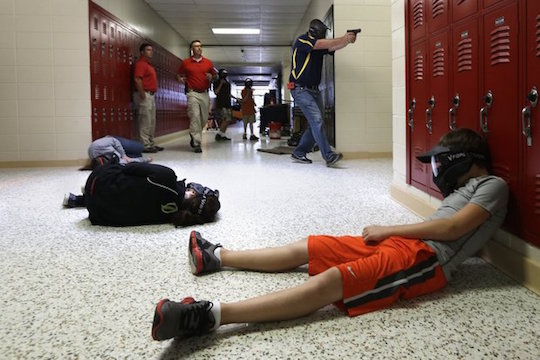 An Arkansas teacher carries a practice handgun in a school shooter drill.

The first proposed ballot initiative of the 2016 election has been submitted by Whitefish High School student Chet Billi, who wants to let teachers with concealed weapons permits carry guns in school. Obviously, I support this idea. If Billi’s proposal becomes law, we can stop mourning school shootings and start mourning school shootouts. You can read all about it in my most recent column for the Missoula Independent, currently the subject of a raging debate on the Indy’s Facebook page re: satire. Don’t worry: the word “idiot” has already appeared. While we’re shifting argument from ideas to people, you might enjoy this letter to the editor from Missoula defense attorney Lisa Kauffman, who takes issue with my treatment of her client Timothy Schwartz. Her opinion is valid, but I take exception to her claim that it was a “fiction” to report that she cried at the end of the trial. I saw it. It’s in my notes. We’ll be back tomorrow with Friday links and a less sanctimonious attitude toward the truth.