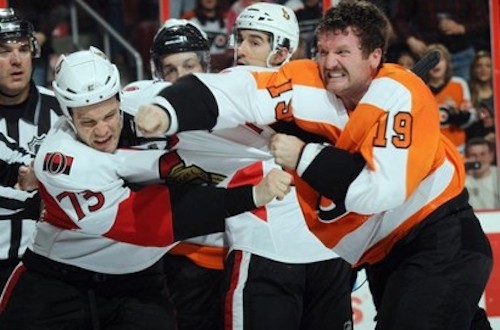 A hockey period, which is the third-angriest kind

Over at the New Republic, Ben Crair has written this consideration of why the period has become an angry punctuation mark. It’s a fun read, but I’m not sure I accept his premise. To wit:

The period was always the humblest of punctuation marks. Recently, however, it’s started getting angry. I’ve noticed it in my text messages and online chats, where people use the period not simply to conclude a sentence, but to announce “I am not happy about the sentence I just concluded.”

First of all, the comma was always the humblest of punctuation marks. People don’t have long discussions about whether to omit the period in any given sentence and then agree that it doesn’t matter. More importantly, though, is this subtle change in broad, undocumented patterns of usage real?

I think we can all accept the premise that people type differently in real-time chats than they do in formal writing or even email. I first thought consciously about this phenomenon re: the in-game chat of World of Warcraft, which is almost totally devoid of punctuation and capitalization.

When I first started playing, I would type chat messages like, “There’s an orc warrior by the Lumber Mill; let’s melt him with fire,” because eff you—I type all day. I assumed that most people chatted along the lines of “your goin wrong way [n-word]” because they were children, and not especially smart ones.

While that is true, typing with correct punctuation and capitalization is a faux pas in WoW for reasons I cannot determine. Perhaps it is seen as uppity. Regardless, it indicates the noob, and I stopped doing it. I now send my in-game chats with neither initial capitalization nor terminal punctuation, although I can’t let go of apostrophes. It galls me, but such is the lingua franca of Orcsville.

Text messages are different, because the person you’re texting knows who you are. Employing standard written English does not suggest that you are new to texting and therefore need not be taken seriously. It can, however, instill unpredictable interpretations in your reader. More than one of my friends has remarked on how correctly-written my texts are, implying that the effect is off-putting.

Unnecessary formality is often a faux pas, and it’s one the nerdy are prone to miss. It’s like when everyone is enjoying pleasant diurnal rhythms on Happy Days, and then some tweedy type calls the Fonz “Mister Fonzarelli” and ruins it. To speak correctly is to be formal. To be formal with strangers is to appear uncool. And to be formal with one’s friends often appears hostile.

Here we arrive at Crair’s thesis. The problem—not with the thesis, maybe, but with the phenomenon it describes—is that punctuation serves a functional purpose that formality in face-to-face interactions does not. That function may not be present in a given text message, but we have trained ourselves to type correctly in the same way we have trained ourselves to enunciate. The difference between standard usage and informal texting is not merely the difference between “you” and “thou.” Punctuation et al not only conveys formality but also shapes meaning.

I capitalize and punctuate my text messages because I don’t like how flat and colorless my voice sounds without it. Most people do not care. Here, I think, is the overtone that Crair identifies as anger. Correct usage in informal communication sounds dicty.

To the casual chat typist, the typist of standard English appears to be acting as if someone is watching when no one is. It is that pretension which refuses intimacy.

We can observe a similar phenomenon that produces a different effect in the habit of parents who sign their text messages. Reading “Love, Mom” after each message is sweet and kind of funny, but is also alienating. Suddenly the chat goes from being Mom’s voice to being a disembodied communication sent by Mom, which of course it is. The signature shows an amusing unfamiliarity with the medium, but it also reinforces the separation that medium imposes.

Perhaps disregard for punctuation elides that separation. It implies that the texter was typing quickly, trying to get her feelings down as fast—immediately, if you will—as possible. Those of us who have to slow down to remember not to capitalize and punctuate are out of luck. Probably we should abandon standard usage in text messages, because they are communications after all. It’s the recipient’s interpretation that counts. But forget that. I may be texting to you, but I’m typing for me.