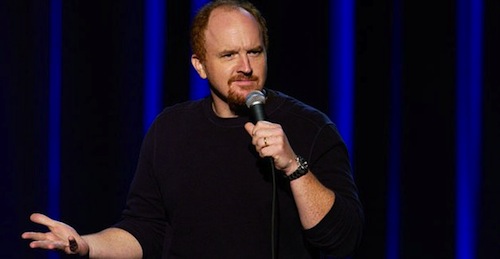 Louis CK, who is selling his recent stand-up special for $5 on his website

Greetings from an unusually relaxed Monday around the Combat! blog offices, where we have been drinking coffee and arranging terrariums to catch some unusual Montana sunlight. Even my relaxation takes the form of compulsion, but at least everything is nourished. As any homosexual shut-in will tell you, plants make food from sun and water. I tend to think culture works the same way, in that out of the dirty, damp business of society grow a few arts, works and artists that are rad. Really, it doesn’t happen like that. Culture comes from a culture industry—or it has for the last sixty-some years.

Consider the music industry. When I loved nothing above punk rock, the phrase “music industry” was a sort of epithet for all forces opposed to human endeavor. The Blue Meanies would be a hugely successful band, were it not for the powerful ignorance of the music industry. In fact the Blue Meanies were not hugely successful because very few people want to listen to that type of music, which in the late nineties had to be distributed on an independent record label called Asian Man. Not enough people listened to them so they didn’t make it big, and they weren’t big so the music industry didn’t make people listen to them.

You didn’t have to be a 20 year-old college student with a mohawk to identify the villain in that system: it was the industry. Either that or it was the problem of efficiently distributing plastic discs in varying numbers and combinations to different locations in the United States based on how many you guess people want to buy. Interestingly, the latter has evaporated almost completely thanks to data compression and broadband internet. That is how, for example, Louis CK is selling his own stand-up special as a $5 download direct from his website.

Note that probably he could not make a million dollars by doing so if it weren’t for the culture industry. Louis CK looms high in popular consciousness thanks to his rad show on FX and—based on sheer number of talk show appearances and New York Times articles—a good publicist. But his stand-up special as a discrete unit is industry-free. It raises the possibility of culture without an industry, save the servers and transactors that make distributing that culture possible.

I can’t stop listening to it since I stole it off BitTorrent, which I didn’t need to do because A$AP Rocky is giving it away for free. Maybe they’re just trying to figure out my address so they can come over and sleep with my girl, as they keep threatening to do, or maybe it is a better proposition for them to give their music away on the internet than to distribute it via the music industry. Exciting corollary: maybe the apparatus that rendered upon us Black Eyed Peas is not necessary.

The aforementioned BitTorrent kind of broke it either way. Of course I would never download a movie from the internet, since that is stealing and also they enforce it, but a similar thing is happening to the film industry on a smaller scale. Not coincidentally, the digitization of music and film has coincided with the availability of digital tools that make making music and movies cheaper, and probably easier. It is possible that less expensive production plus very cheap distribution will replicate conditions of cultural growth that preceded the culture industry.

I knew the Blue Meanies were doomed because they wouldn’t cater to the homogenizing demands of the record industry. But weren’t those the demands of the record-wanting public? Viral videos and YouTube stardom have given us Justin Bieber and that Friday girl. Have they given us a Violent Femmes? No, because most people like stuff that sucks. For maybe the first time in history, though, you can make the numbers work by scraping together the small portion of us who don’t. That is a reason to feel good on Monday, right there.