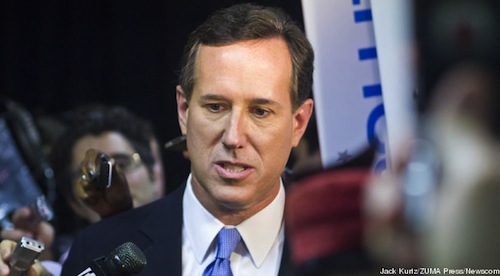 For the purposes of this theory, I’m going to assume that Santorum actually believes the batshit ideology he professes. If his opposition to sex and pro sports is a cynical ploy to win voters, he is perhaps the most poorly-researched cynic in history. It seems more likely that his plan to scold the nation into making him president comes from genuine, heartfelt revulsion for the modern world. He is a man with a vision. It is a vision of the past, and he is traveling America to spread his message that pretty much everybody is indecent and the country is going to shit.

Note the congruence with the worst spirit of, say, Combat! blog. Most days we prioritize inquiry over indictment, but every once in a while we give in to the strangely comforting fantasy of decline. Americans are the fattest people on Earth; the rich press their advantage; the argument that Miracle Whip is a force for individuality is now credible. These propositions may be true, but their common quality is that they provide evidence for an unfalsifiable hypothesis: we approach the bottom of a downward-trending line.

As broad sociological theories go, that is less a discovery than an excuse. People have been decrying the collapse of everyone else’s character since Horace, probably because it is doubly comforting to do so. Declinism doesn’t just assuage your angst about the future; it also excuses you from taking responsibility for the present. Complaining is awesome, as any of my ex-girlfriends/orthopedic surgeons/ex-girlfriends who accompanied me to the orthopedic surgeon will tell you. It is also kind of undignified. The expert complainer will therefore complain about the general state of the world and/or the general quality of the people in it, and assume the more noble office of Cassandra.

Which brings us back to Rick Santorum. As Tom Ferrick has noted, Santorum is essentially running a campaign against the modern world. He is against sex for pleasure and college as a norm. He has promised to return the United States to a manufacturing economy. The man is disgusted by developments in church/state separation from 1960, for Chrissake. Everywhere he looks, he sees the failure of People These Days. In this regard, his attitude of moral repugnance toward contemporary America has almost the exact same texture as our attitude toward supporters of Rick Santorum.

The evidence is different, of course, but the conclusion is the same. When I looked at the Super Tuesday results and saw that Santorum won North Dakota, Oklahoma and Tennessee, I made a smug clicking sound with my mouth. Those are the resentment states, as any resentful person will tell you. Probably, the Satorumizers in Oklahoma City—okay, in the suburbs and rural counties surrounding Oklahoma City—greet the news that Barack Obama is making us all pay for law students’ birth control with the same gleeful despair that we brought to Santorum’s near win in Ohio. In this way, we smug enlightened have more in common with them than we think.

The other thing we have in common is that our fundamental proposition is completely useless. Santorum has absolutely no ideas to address the actual problems facing 2012 America. He is like a heart surgeon whose plan for treatment is to burn down Burger King. Here we approach the fundamental flaw of declinism: even if the conclusion were true, what would you do with it?

If you knew conclusively that the country, as an aggregate, were dumber and fatter and more demandingly entitled than any America in history, would you do anything different? A person of decency would not. A person of decency—at least a person at his or her most decent—recognizes that a problem needs a solution regardless of how few resources are at our disposal. In such times as these, it is tempting to cross our arms and note how right we are about everybody else. That is how such times as these endure.