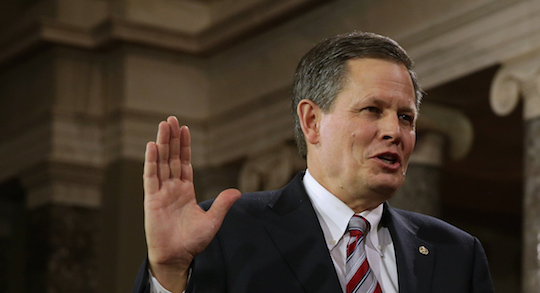 Sen. Steve Daines (R-MT) at the roast of Green Goblin

Ours is a lively time for federal government. Just this morning, Republicans in the Senate released a health care bill they’ve been crafting for weeks. We’ve withdrawn from the Paris climate accords. According to the president, who is admittedly not a reliable source, the president is under investigation by special prosecutor. Now seems like a particularly thrilling moment to be a US senator. With a seat in that chamber, a person could shape history. In unrelated news, Sen. Steve Daines, Republican of Montana, has proposed a constitutional amendment to prohibit flag burning.

On Flag Day, 1 his office issued a press release touting his plan to “give Congress the authority to prohibit burning of the American flag.” It included approving reactions form the Montana Veterans of Foreign Wars, the American Legion on behalf of the Citizens Flag Alliance and, on the left, the American Legion of Montana. Although the amendment looks like a slam dunk among Eisenhower-era social organizations, its reception in the press was more mixed. Here’s Jesse Chaney of the Helena Independent Record, on the campaign’s opinion about whether this isn’t the first restriction on free expression in American history:

Daines’ staff said the senator does not consider flag desecration to be a form of peaceful expression. They said his amendment would not limit anyone’s right to expression, but [would] distinguish flag desecration as conduct not protected by the Constitution. The senator’s staff noted that Congress already bans many other forms of conduct through criminal law.

I checked with a lawyer, and that last part is right: criminal law does ban many forms of conduct. But all expression is a form of conduct. It’s a subcategory. Daines’s argument is like saying, “That’s not a square; it’s a rhombus.” What distinguishes expression as a particular type of conduct is its symbolic meaning. Speaking aloud is conduct, but it is the symbolic content of the noise that we endeavor to keep free. And Sen. Daines himself calls the flag a symbol twice in the second paragraph of his press release. Quote:

The American flag has been a symbol of hope and freedom for centuries and ought to be respected. Our nation’s flag must be set apart as a protected symbol worthy of honor.

It’s almost like his argument has no underlying logical framework at all. Maybe it sounds better in the original Goblish. You can read many such cheap cracks and appeals to internal coherence in this week’s column for the Missoula Independent.

We will not be back tomorrow with Friday links. We will be driving to a wedding in Washington state, and the following week we’ll be in New York City with our girlfriend. There will be no Combat! blog from Monday, June 26th through Wednesday, July 5th, so that I can work on the goddamn novel and still have time to see the sights.2 Is this the longest vacation Combat! blog has taken in its nine-year tradition of existence? Yes it is. Will we all be okay? Probably. What am I, a futurologist?