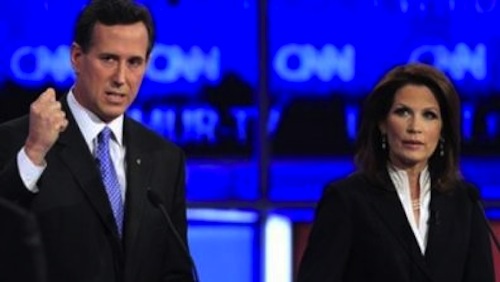 Republican presidential candidates Rick Santorum and Michele Bachmann, standing up for something or other

Last week, when Michele Bachmann and other, less amusing Republican presidential candidates visited Iowa, they were approached by local busybody Bob Vander Plaats and asked to sign something called The Marriage Vow. You may remember Vander Plaats from his infuriatingly successful campaign to recall Iowa Supreme Court justices who said gay marriage was constitutional, or from when he offered to fellate you in a highway rest stop, although that second one is technically libel. Anyway, Bachmann and man-on-dog guy signed the heck out of that pledge, taking the politically risky position that families, children, not cheating on your wife and church are all good. Plus, by deduction: homosexuality is bad. Oh, and also black people had it better under slavery, because more of them were married then.

That last part, uh, maybe The Family Leader shouldn’t have put that in there. Here it is in its original:

The footnote accompanying this passage cited a statistical abstract from 2005, which sort of undercuts the concept “after the election of the USA’s first African-American President.” It’s cool, though, since The Family Leader took that part out—after B&S had signed it, but whatever. The point is, it goes without saying that both candidates think slavery was horrible. Although it does go a little less once you actually hear them say it. Here’s Bachmann’s spokesperson:

In no uncertain terms, Congresswoman Bachmann believe that slavery was horrible and economic enslavement is also horrible.

See, there’s an uncertain term in there. CNN did not inquire as to what “economic enslavement” meant, but presumably it has something to do with health care reform. One of the things so brain-slippingly offensive about the original item was that it created a vague moral equivalence between the problem of slavery and the problem of people getting divorced. That Bachmann set out to repudiate that equivalence and, in the process, constructed another one is a testament to the kind of deep thinking we’re working with here.

It’s a pledge. Bachmann didn’t give much thought to the slavery paragraph when she signed it the first time; she was also okay with Vander Plaats changing a document she signed after she signed it, and now that it’s been changed her public statements suggest that she doesn’t understand exactly what it said either then or now. You know why? Because Michele Bachmann’s word is not something she takes seriously. That’s why she knows so many statistical facts.

This phenomenon is captured nicely in the bullet point with which the Family Leader replaced the original slavery claim. Quote:

LBJ’s 1965 War on Poverty was triggered in part by the famous “Moynihan Report” finding that the black out-of-wedlock birthrate had hit 26%; today, the white rate exceeds that, the overall rate is 41%, and over 70% of African-American babies are born to single parents—a prime sociological indicator for poverty, pathology and prison regardless of race or ethnicity.

The footnote for this claim—that living in a single-parent household is “a prime sociological indicator” for such phenomena as “prison” and “pathology”—cites this Heritage Foundation “webmemo,” entitled “Married Fathers: America’s Greatest Weapon Against Child Poverty.” That particular work of scholarship is chock full of questionable claims, but the central one is that “the principal cause of child poverty in the U.S. is the absence of married fathers in the home.” Here’s how they prove it:

According to the U.S Census, the poverty rate in 2008 for single parents with children was 35.6 percent. The rate for married couples with children was 6.4 percent. Being raised in a married family reduces a child’s probability of living in poverty by about 80 percent.

Can you spot the logical fallacy in this argument? Correlation is not causation, and “being raised in a married family” happens to dramatically increase the likelihood that a child’s census-identified household will contain two people who earn incomes. For sure, single mothers are more likely to be poor. Any one of them is also less likely to garner the same annual wage as two adults of her educational background, especially since child support payments are not included in household income.

But I am making a classic mistake of the secular person confronted with the church person’s argument about how we should remake society: I am treating The Family Leader, Vander Plaats, and Sanmann-Torbach as if they really wanted reduce child poverty. If they did, maybe they wouldn’t consistently vote against unemployment benefits and aid to families with dependent children. But for these people, “stay married” comes first, and the reasons come second. The obvious reason behind The Marriage Vow is “the Bible says so.” Maybe that’s what the letter will say when President Bachmann tells you that you can’t get divorced.