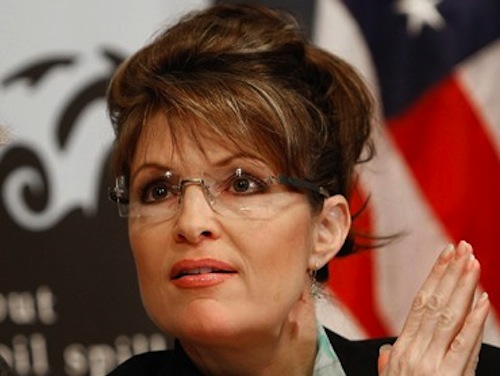 I follow three people on Twitter: Ben Fowlkes, Iowa legislator/general nutjob Kim Lehman, and Sarah Palin. Yesterday, SarahPalinUSA directed me to Facebook for a “statement on 2012 decision.” The statement is that she isn’t running. She cites the same reasons that have been drifting through her various word-clouds for the last month: that she wants to help other conservatives get elected, that she doesn’t need a title to “restore” America, that no one who owns a TV or has heard of America would even briefly consider putting her in charge of it. That last one is implied, I guess, but the upshot is that even Sarah Palin knows Sarah Palin can’t be President. Most of her announcement is what you’d expect, except for the first paragraph. That’s actually a work of considerable nuance, or at least insinuation, and it’s the subject of today’s Close Reading. Primary source after the jump.

Here’s how Sarah Palin announces that she’s depriving us of the opportunity to vote for her:

After much prayer and serious consideration, I have decided that I will not be seeking the 2012 GOP nomination for President of the United States. As always, my family comes first and obviously Todd and I put great consideration into family life before making this decision. When we serve, we devote ourselves to God, family and country. My decision maintains this order.

First of all, take a moment to picture the 2008 Republican nominee for the vice-presidency praying, night after night, hands folded and eyes squeezed, desperately trying to hear the voice of God from her den in Wasilla. Praying is exactly like thinking really hard about a decision, with the added ingredient of telling yourself you bear no responsibility for what you decide. “Much prayer” is a rhetorical device in the contemporary Republican Party, though, the same way Obama says “God bless America” when he means “Allahu akbar.” It’s a tic, currently in fashion. What never goes out of fashion is English grammar.

Let’s be dicks to Sarah Palin and map the second sentence of her announcement, As always, my family comes first and obviously Todd and I put great consideration into family life before making this decision. Two violations of standard usage conspire to thwart sense here. Children and childlike adults of America, I say unto you: use a comma to join two independent clauses with a conjunction, and skip the comma when using a conjunction to combine an independent and a dependent clause. Sarah prayed for six hours and blacked out, whereas Sarah prayed for six hours, and Todd blacked out on his snowmobile.

but for the introductory clause As always. With no comma to separate the two subsequent indie clauses, we have as always my family comes first and as always obviously Todd and I…I have no problem with the always obvious consideration of the Palin family, but then before making this decision comes along and wrenches us out of always time and back into linear time. The human brain does not think that way, and we’re left with the nagging unfocus of a bad sentence.

Fortunately, we finish strong with When we serve, we devote ourselves to God, family and country. My decision maintains this order. The choice of order here is freaking masterful. Order might mean the stable, organized, connotatively ordained way of things—the order by which people choose their loved ones and weirdo religious perceptions over their political ambitions. Order can also mean “hierarchy,” so that this order reads as “God, family and country, in that order.”

It’s an excellent dog whistle, in that it simultaneously maintains a professional tone, implies religious fanaticism to those who want to hear it, and absolves Palin of responsibility for her decision again. It’s also kind of nuts. Putting aside my personal feelings re: God, are we to believe that Sarah Palin puts her family above the United States? If Todd and the guy with the remote control for the dirty bomb in Times Square were drinking at the same Dave & Buster’s, would President Palin not order the drone strike?

I guess neither answer to that question is satisfying, which is why this is probably the best paragraph Sarah Palin has ever written. It’s an assertion of values in the shape of an explanation, and it neatly avoids the step where she shows how her decision actually follows from them. It’s God, family and country for Palin, and God didn’t call back. That leaves Todd, and she and Todd decided not to run for President. Why? Because they decided together. Even when she’s explaining her thought process, Palin’s opinion comes before any reason for it. Her decision maintains this order.