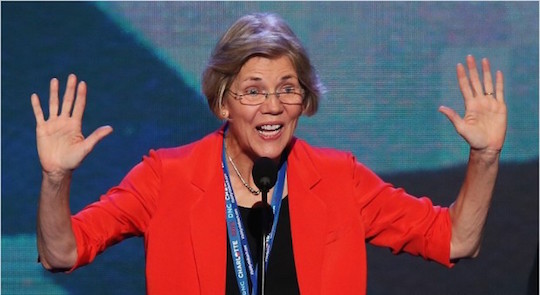 The fashion of the last week has been to blame Citigroup for these changes, particularly among the lefty press. Especially vociferous in her condemnations has been Elizabeth Warren, who tweeted this bad boy last week:

If you’re reading this, chances are you’re an Elizabeth Warren fan. I like her, too, but this tweet is misleading. For one thing, a lot of banking lobbyists pushed for this provision, not just the ones from Citigroup. More importantly, it’s not a “government bailout provision.” Citi, et al. want to remove the provision in Dodd Frank that requires them to “push out” derivatives trading to divisions of their business not backed by the FDIC. That could amount to a bailout if derivatives losses stay on the banks’ insured books and require government intervention, like they did in 2008, but describing this legislation in terms of its worst-case scenario makes it harder to talk cogently about the issue. Rolling back Dodd-Frank is a bad idea, but maybe Senator Warren could trust us to comprehend it.

Most importantly, though, Citigroup did not hold government hostage to ram through this provision. Congress held government hostage, just as Congress acquiesced to Citigroup’s demands. Warren’s dissent reminds us that body is not a monolith, but it’s a problematic deflection to cast aspersions on Citigroup for asking when it’s Congress that gave the banks what they wanted.

As analyst Mike Mayo told the Times, “There is nothing wrong with Citigroup asking for something that is in its best interests. The issue is that Congress should say no.” That Congress is so willing to shift the blame to Citigroup suggests they knew they should have said no, too.