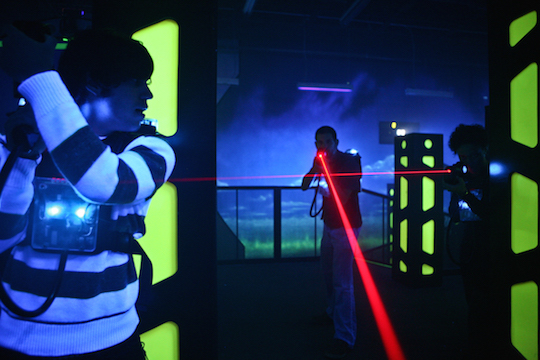 Last night, a select few observed my birthday at The Hub Family Entertainment Center, where we played laser tag and drove go-karts. It was entertaining, and they let us in even without families. Even though I love it, I am terrible at laser tag and came in second to last, probably thanks to one of those five-year-olds who is operatively a stand for eyeglasses. But in my defense, one reason I got lit up so much was that a little girl followed me around the maze at a distance of about two feet, constantly pulling the trigger, not caring if I shot her and simply waiting until her gun reactivated to shoot me again. It turns out that’s a great strategy, in terms of maximizing points. But we didn’t come to laser tag to maximize points, to walk single-file and smile meekly at the person in front of us, even after he told us to go away, even after he tried to run off on his strong adult legs. So the big, important question:

END_OF_DOCUMENT_TOKEN_TO_BE_REPLACED 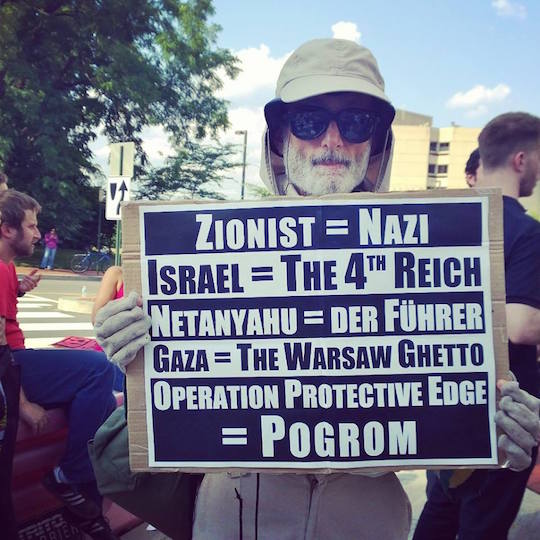 A protestor outside the Israeli embassy in Washington last July

The bold statement in today’s headline comes from Gary Saul Morson’s essay Why Kids Are Avoiding the Study of Literature. You should read the whole thing, but I was particularly struck by his interpretation of Chekhov’s “Enemies.” Quoted at length:

“Enemies” describes a doctor named Kirillov, whose son has just died, comforting his grieving wife as his face displays “that subtle, almost elusive beauty of human sorrow.” We empathize with him, not only for his grief over his son, but also because of his empathy for his wife. It’s a chain of empathy, and we are its last link.

Then the wealthy Abogin arrives to beg the doctor to visit his dying wife, and the doctor, with extreme reluctance, at last recognizes he has no choice. When they finally arrive, it turns out Abogin’s wife has only feigned illness to get rid of her husband long enough to escape with her lover. As Abogin cries and opens his heart to the doctor “with perfect sincerity,” Kirillov notices the luxurious surroundings, the violoncello case that bespeaks higher cultural status, and reacts wrathfully. He shouts that he is the victim who deserves sympathy because the sacred moment of his own mourning has been ruined for nothing.

Nothing makes us less capable of empathy than consciousness of victimhood. Self-conscious victimhood leads to cruelty that calls itself righteousness and thereby generates more victims. Students who encounter this idea experience a thrill of recognition. Kirillov experiences “that profound and somewhat cynical, ugly contempt only to be found in the eyes of sorrow and indigence” when confronted with “well-nourished comfort,” and he surrenders to righteous rage.

Our ability to appreciate other people’s suffering is inversely proportional to our understanding of our own—not how much we have suffered, but how conscious we are of it. Self-pity might be the opposite of empathy.

END_OF_DOCUMENT_TOKEN_TO_BE_REPLACED

Las Vegas is about to get a new military attraction made for civilian entertainment — a hardcore, two-hour “Call of Duty”-esque immersion being built by some top forces who were part of the raids that killed Osama Bin Laden and Saddam Hussein’s kids.

Tactical combat sounded so fun right up until we got to the part about killing kids. But don’t worry: Uday and Qusay Hussein were fully grown when we killed them. By “we,” of course, I mean the heroes of US special forces operations like Seal Team Six, Delta Force, and the Green Berets. By pretty much universal assent, they are the coolest people in American society. It is extremely awesome to burst into a building and surprise hell out of everybody while shooting their center masses. Now you can do that, too, but with pellets instead of bullets and zombies instead of people.