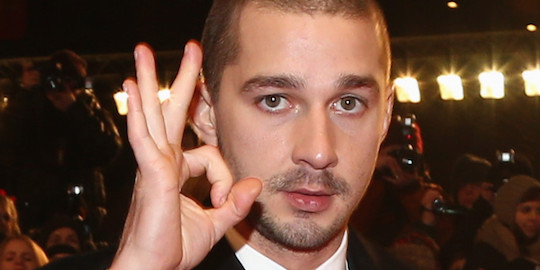 Obviously, if LaBeouf falsely claimed to have been raped as some sort of commentary/performance/hideous expression of his narcissism, then it is he who has trivialized victim narratives, not we. That would be great, in that it’s great not to be the person who did something awful. But if a woman really did beat LaBeouf for ten minutes, rape him, and run out of his art exhibit “with her lipstick smudged” before anyone could catch her, then we connive in rape culture by questioning his account.

This is what The Beef does: he makes you certain that one of you is awful. Can we even call him The Beef now that he is a rape victim? Obviously we cannot, if his story is true. But since even wondering whether his story is true perpetuates the victim-blaming that has made rape America’s most rarely punished violent crime, we should probably dispense with “The Beef” entirely. We should not try to be funny in connection with this story at all.

By our own expressed values, “or he’s lying” cannot be part of our reaction. Even though that’s the subtext of everything LaBeouf has done for the last year, he has hit on the one kind of narrative where veracity is taken for granted. All I can say about this issue, then, is thank goodness LaBeouf is not lying.

Thank goodness LaBeouf is telling the truth when he says a strange woman raped him at his art performance, because lying about it would trivialize the experiences of real rape victims. It’s a good thing it really did happen while his girlfriend waited outside, because that detail in a lie would make her feel terrible.

It’s a good thing LaBeouf really did get raped during the copy of someone else’s work he undertook to sarcastically apologize for copying a third person’s work, because otherwise I would fear that a man who regularly appears in feature films still wants attention badly enough to tell the worst lie imaginable. But someone raped Shia LaBeouf, so we don’t have to worry about that.