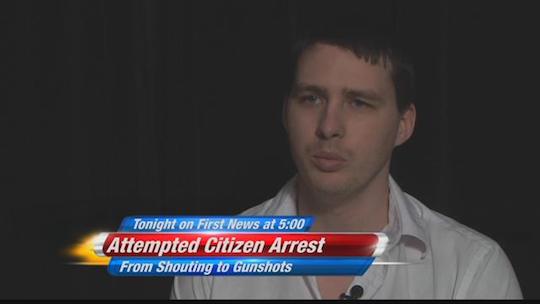 Last month, James Newman of Billings fired six shots across the parking lot of Rimrock Mall while trying to make a citizen’s arrest for shoplifting. Police questioned Newman and released him at the scene, apparently satisfied with his contention that he fired in self-defense. The former Marine had confronted two people he suspected of stealing from JC Penney, insisting they wait with him for the authorities to arrive. When they got in their car, Newman stood behind the parking space in an attempt to block their escape. He drew his weapon. “If you hit me now,” he shouted, “I will [expletive] open fire.”

He wound up opening fire anyway, firing six shots at the car as it drove away. None of these shots hit the mark, which is a sad coda to this story of valor. If only Newman had killed one of the people whom he was trying to arrest for a misdemeanor in his capacity as a private citizen, we would laud him as a hero. As it is, he is just one of Montana’s many responsible handgun owners, who happened to bring his gun to the mall on the same day circumstances happened to force him to take the law into his own hands. You can read my paean to this brave citizen and C-plus marksman in this week’s column for the Missoula Independent. We’ll be back tomorrow, perhaps, with Friday links.