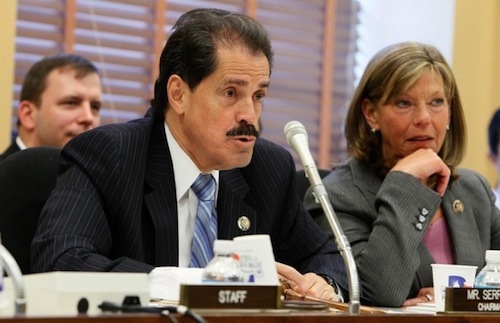 Rep. José Serrano (D–NY) and a woman who should be played by Jane Curtain

Yesterday, I encountered a chain email warning that Congress planned to repeal the 22nd Amendment and allow Barack Obama to be elected President again and again for life. It is an established sort-of hoax, as Snopes explains. Rep. José Serrano of New York has proposed to repeal the 22nd Amendment every two years since 1997, regardless of which party held the presidency, and thereby enabling claims like this:

Snopes does a fine job of debunking such claims. What it does not do is tell us why Serrano would introduce the same doomed constitutional revision every session.

Neither does the congressman’s website. It’s safe to say that repealing the 22nd is Serrano’s signature issue, yet his legislation page does not mention it. Repeal is not without its backers, including beloved two-term presidents Reagan and Clinton, yet Serrano appears to be both passionate enough about the issue to raise it every Congress and abashed enough to keep it out of his PR. Evidently, he just doesn’t like term limits.

Serrano’s steadfast refusal to make himself the poster boy for his own crusade leaves the biannual news of his proposal extremely vulnerable to interpretation. The very conservative Daily Caller, for example, reports that “the bill, which has been referred to committee, would allow Barack President Obama to become the first president since Franklin Roosevelt to seek a third term in office.” That’s the second paragraph; it doesn’t mention that Serrano has introduced the legislation every session until paragraph five. Fox News, for once more objective by comparison, does not frame the proposal in terms of an extended Obama presidency—although it remains true to form with the headline “House Democrat Serrano tries to alter Constitution.”

Compare this treatment of Serrano to that offered by Fox News Latino. Presumably because Serrano is an L, FNL does not include the phrase “losing streak” in its description of his attempts, noting instead that “Serrano is not the first, nor the most prominent, opponent of the 22nd Amendment, which some say effectively makes the president a ‘lame duck’ in his second term.” It does not mention Serrano’s long history of failing to amend the constitution, or his refusal to comment on it.

Essentially, you can get this story from three different tiers of news. There are chain letters forwarded to you by your aunt’s friends, which report that an Obama dictatorship is night upon us, poised to overturn the will of the people by letting them elect him every four years for decades. Then there are nakedly partisan sources like the Daily Caller and such user-generated content farms as the Examiner, which assume the form but not the authority of news. Closer to actual reporting, Fox News and Fox News Latino lay claim to objectivity while manifestly serving different agendas—agendas that only reveal themselves in cross-article comparison.

What is missing from this continuum is serious reporting. Fox was the most reputable outlet I could find that actually covered Serrano’s proposal; presumably, the Washington Post and other respectable news sources don’t cover gestural legislation that dies in committee every session. That leaves a vacuum other media outlets can rush to fill. Call it news for the systematically uninformed, reporting for people who primarily want evidence.

Intentionally or not, Serrano is therefore providing a public service. No matter which party occupies the Oval Office, his proposal gives ammunition to those who would argue that the president intends to become a dictator. By doing so every session, Serrano inures any informed person to that claim. The uninformed, however, can have their outrage stoked afresh.

We again return to the question of why. Perhaps Serrano believes that lifting presidential term limits will be a defining issue someday, and he wants to be remembered as an early pioneer. Unless he is such a true believe, the question of why he introduces the same doomed legislation to each new Congress does not yield many satisfying answers. Maybe he knows that it riles a certain number of people up. Maybe he is reminding America to gird itself against any president who seems too popular, like the way a vaccine works. Maybe he is a genius that way. Or he is an asshole and, like other assholes, he feeds the entire asshole system.