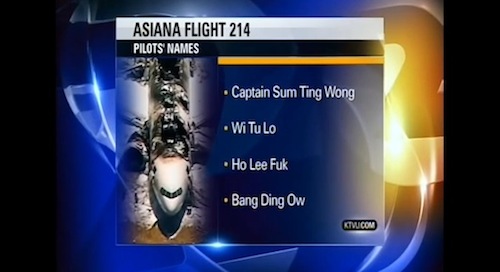 Reuters reports this morning that Asiana Airlines has abandoned plans to sue San Francisco Fox affiliate KTVU. In its early coverage of the crash of Flight 214, the station broadcast joke names for the flight’s pilots, which it says were confirmed by the National Transportation Safety Board. The NTSB blames it on a summer intern. The whole saga makes you feel safe, doesn’t it? The unfolding of this story inspires nothing but confidence—in our news outlets, in our federal safety administrators, in our emergency personnel, and in the corporations that raise us 30,000 feet into the air and, one way or another, return us to the ground. Now please excuse me while I polish my tiara, because I am Marie of Romania. Video after the jump.

At least she didn’t say the f-word, right? Obviously, in the aftermath of a plane crash possibly caused by pilot error, Asiana Airlines’ number-one priority is to ensure that their good name is not besmirched by junior-high racial humor. I would describe their short-lived but immediately announced plan to sue as a PR blunder. Planes crash, but an airline whose plane has just crashed should project an image of shocked concern. Playing offense against anyone who can be remotely construed as defaming you does not yield a net gain in reputation.

But oh, to be a line producer at KTVU right now. San Francisco is not a small market. How many news professionals did the name “Ho Lee Fuk” get past before it reached the poor woman who read it uncritically on the air? KTVU apologized for the mistake during its evening broadcast, noting that part of the problem was they never read the names out loud. They also did not ask who their confirming official at the NTSB was. Basically, they performed the same journalistic function you aunt does when she forwards you that dollar coins chain email.

But at least heads are rolling at the NTSB, right? Sort of: they’ve fired the unnamed intern and assured us that he acted outside the scope of his authority. Exactly how summer interns find opportunities to act outside their authority at a federal agency has not been explained, but presumably the danger is limited to puns. Also, KTVU’s claim that no one ever read the names out loud is obviously contradicted by their claim that they confirmed them with the NTSB over the phone.

So what we’re looking at is a symphony of incompetence, from the pilot who missed the runway to the firefighters who ran over a passenger to the journalists who reported it and the safety board that is supposed to prevent it all in the first place. It is hard to view this majestic landscape of fuckups and not succumb to declinism.

I have no evidence to demonstrate that this story is not proof  we live in a stupider time, unless you count the thousands of commercial flights that don’t crash every day. The problem with trying to assess the competence of our era is that we have so little to compare it to. Nietzsche argued that it was pointless to say that life was good or bad, because what else do we know? To say that our time is dumber or smarter than previous times is to encounter the same problem. Aside from the report of history, we have no basis for comparison.

Perhaps that’s just as well. If you knew conclusively that your society was, on the aggregate, less competent and more venal than the society of your grandparents, what would you do with that information? Any individual adjustments you might make for the quality of those around you have probably already been made, over the course of your whole life. And even massive popular outcry wouldn’t change much. Our culture already encourages people to be competent.

Functionally, at least, declinism is a dead end. All it does it make giving up feel like a more valid alternative, and that’s no use at all. But how to respond to the news that an inexperienced pilot crashed a 777, a fire truck showed up and drove over one of the passengers, the news broadcast obviously fake names of the pilots involved and then the airline threatened to sue for making them look bad? It is a comedy of errors in which a bunch of people get hurt or die. Is there some worth in considering it an indictment as well, or is that just self-indulgent curmudgeonry?

“Our fathers, viler than our grandfathers, begot us who are even viler, and we bring forth a progeny more degenerate still.” —Horace, 23-13 BCE