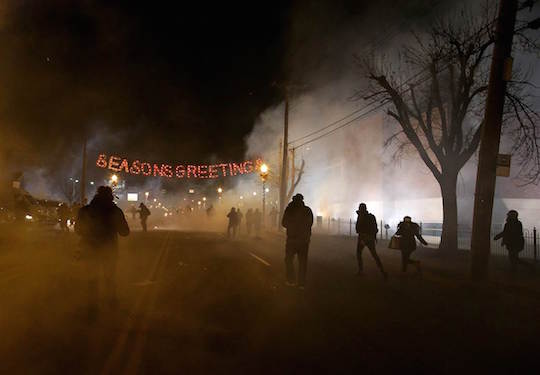 That’s not a perfect comparison, since Wilson’s case went before a state grand jury and not a federal one. Still, it’s considered a truism that prosecutors can pretty much always win an indictment. Judge Sol Wachtler famously remarked that a grand jury could be convinced to indict a ham sandwich.

Not a cop, though—in Houston, no police officer has been indicted in an on-duty shooting since 2004. Dallas grand juries reviewed 81 police shootings between 2008 and 2012 and returned just one indictment. It’s hard to know how frequently or rarely grand juries indict police who kill people in the line of duty, because police departments don’t report how often their officers are involved in fatal shootings. But it seems safe to say that cops who kill people on duty are rarely charged.

Here’s one of the pictures the Ferguson jury saw, documenting injuries Officer Wilson sustained before he killed Michael Brown:

As you can see, he got socked in the jaw; another picture shows an abrasion on the back of his neck, although I look about the same after a haircut. Those appear to be the extent of Wilson’s injuries. Note that the bruise is on the right side of his face, which is hard to square with his account of Brown striking him through the driver’s side window of his patrol car. But a lot of Wilson’s account of the killing does not square with common sense. I quote page 34 of his annotated testimony:

At this point it looks like he was almost bulking up to run through the shots, like it was making him mad that I’m shooting at him. And the face that he had was looking straight through me, like I wasn’t even there, I wasn’t even anything in his way.

That turned out to be the face Brown made before dying of six gunshot wounds. Wilson’s description suggests that he was frightened by Brown to an unrealistic degree, as though the officer perceived the teenager as something more frightening than a person. Wilson is 6′ 4″ tall and weighs 210 pounds. Brown was 6′ 4″ and weighed 292 pounds. In his testimony, Wilson likens Brown to “Hulk Hogan” and “a demon” and repeatedly mentions his fear that shooting him would have no effect.

So about that rule of law: to black people in Ferguson, the rule of law looks like frightened white men with guns. It looks like a governor who declared a state of emergency before the grand jury announced its verdict. It looks like a legal system where grand juries return indictments 99.993% of the time, unless it’s a police officer who killed someone. It looks like yesterday, when the 24-hour news cycle colluded with the State of Missouri to wait to tell Americans something we all wanted to know, until it was dark outside and we were less likely to riot.

In Ferguson, the rule of law looks like a police force that is overwhelmingly white supervising a town that is overwhelmingly black. It looks like a grand jury that has declined to even consider punishing one of those white officers for killing an unarmed black teenager. It looks like the riot squad gassing protestors in August and telling them to go home and wait for a grand jury to do its work, then gassing them again in November and telling them to accept the rule of law.

That is our nation of laws, not men. It just happens that the law decided in favor of men with guns and tear gas, and they all came together to help us accept it.