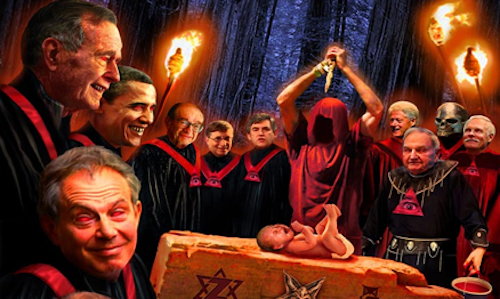 The FISA Court reviews a federal warrant request, for all we know.

Is that Ted Turner next to Skeletor in this artist’s rendering of the Illuminati? It doesn’t matter; when a convocation of power is secret, we from whom the secret is kept can let our imaginations run wild. Even if you don’t think the secret courts that approve NSA and FBI wiretapping requests allow the federal government abuse its power, you have to admit that they encourage mistrust. Secrecy is a double-edged sword. When you tell the American people that what you’re doing is completely legitimate and you can’t say why, a segment of the population*

Carr’s editorial is valuable not only for this reasonable insight, but also for its historical background. The FISA court was created in 1976 in response to the Church Committee, which found—among other things—that the FBI had been surveilling Martin Luther King. The court is by no means new, and neither are the abuses it was designed to prevent. Since September 11, 2001, however, the number of requests it is asked to review has increased dramatically, as has its willingness to agree with government attorneys.

In order to look at an American citizen’s emails or listen to his phone calls, the federal government must show probable cause that said citizen is connected to a foreign government or terrorist group. According to Carr, the FISA court has adopted an increasingly flexible sense of what “probable cause” might be. The same absence of an opposing argument that encourages a cop to regard virtually any behavior as probable cause to stop a suspect on the street has led the court, for example, to let the feds collect the phone records of every American citizen. Quote:

The low FISA standard of probable cause — not spinelessness or excessive deference to the government — explains why the court has so often granted the Justice Department’s requests. But rapid advances in technology have outpaced the amendments to FISA, even the most recent ones, in 2008. Having lawyers challenge novel legal assertions in these secret proceedings would result in better judicial outcomes.

Pretty much every argument sounds convincing when you don’t hear the other side. That’s how you wind up with the concept-nullifying claim that the government has probable cause to believe every American is connected to foreign terrorists. Appointing attorneys with top-secret clearance to argue against the government in FISA court proceedings might restore an intuitive sense of what “probable cause” really means.

It would also go along way to dispelling the illusion that FISC is a kangaroo court—if that is indeed an illusion. As Carr points out near the end of his editorial, the subjects of ordinary warrants know when those warrants are executed and can challenge them after indictment. I’m willing to accept the argument that the nature of anti-terrorism intelligence precludes disclosure of warrants to their subjects. Even the most ardent defender of government prerogative, however, must accept the possibility of a bad warrant request.

The very existence of the court presupposes that the FBI or NSA could be wrong. Now that the federal government has demonstrated a willingness to move defendants in terrorism cases out of civilian courts and into military ones—or just semi-secret prisons, even when those defendants are American citizens—it is reasonable to say that the right to challenge a FISA court warrant after indictment has not been meaningfully guaranteed. Carr says as much in the last paragraph of his editorial. Given that such protection against federal mistakes is not present in the FISA court’s review of warrant requests, isn’t it reasonable to install attorneys for the other side?

It is, provided you want the court to check the executive branch. If you want the court merely to provide a veneer of legitimacy to executive fiat, we should keep the adversarial process out of it. That’s the court we have now, and it approved every request the federal government made last year. That fact forces the ordinary American to decide whether law enforcement is perfect or the FISA court is a sham. Probably, neither answer is right. If my country is going to have a secret court, I’d like to be able to send a secret lawyer in there to secretly argue on my behalf. Because who knows if my name is on a warrant or not?