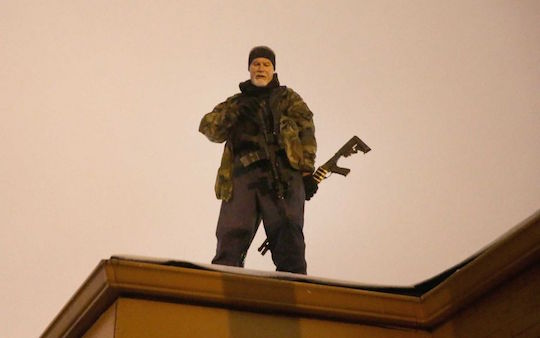 Those of you who do not live in Missoula for some reason might be unaware of the windstorm that blew through Monday night, which knocked down the big cottonwood outside by window, which in turn decapitated the utility poll in my front yard and shattered across the bridge, blocking Front Street. It was exciting.

Last night around 10:30pm, a work crew began chainsawing apart the pieces of the cottonwood and throwing them in a wood chipper. This process lasted until approximately 3am. I know the city has been scrambling to address the damage from the storm, but chainsaws and wood chippers—to say nothing of the cherry picker that beeped every time it moved up, down, or backwards—are daylight tools.

It was just another instance of big government colluding with big wood chipper to infringe on our constitutionally-guaranteed right to free sleep. I’m not sure what the noise ordinances are in times of emergency or whether the city was allowed to cut my perfectly functional—albeit hanging approximately six feet above the street—internet line, but I’m pretty sure the constitution settles all of that. What I need is an armed patriot to settle this question of constitutional law for me.

Unfortunately, they’re all in Lincoln. The Oath Keepers—last seen standing up to an obstreperous federal government on behalf of rancher Cliven Bundy—have decided to patrol a mining dispute between the Department of the Interior and George Kornec. Interior says Kornec needed a permit to build a garage on his claim. Kornec says his claim predates the 1955 law that requires such permits and is bound only by the General Mining Act of 1872. The Oath Keepers, who are neither geologists nor attorneys, have come out in force to make sure nothing illegal happens.

I’m not sure standing around with guns is going to help resolve this mining dispute. You can read about my skepticism, thinly disguised as enthusiasm, in this week’s column for the Missoula Independent. Read it slowly, because I am flying to Toronto this afternoon and won’t be back until Monday. And Sunday is my birthday! I am hideously old, as evidenced by my anger at loud sounds in the night.

Update: The Oath Keepers have declared their mission accomplished in Lincoln, since the Forest Service has not used force to knock down Kornec’s garage but instead taken the matter to court. Sheriff Leo Dutton says there was no threat of force to being with. But who are you going to believe—a sheriff, or a posse of volunteers with guns?