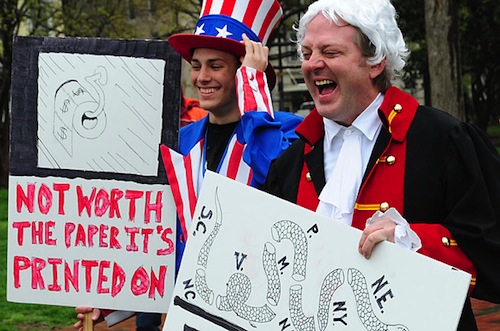 If you want to feel righteous fury followed by creeping skepticism, check out the cross-tabulation at the bottom of survey page three. There you will find that support for an armed revolution drops from 36% among high school graduates to 22% among college graduates. Both of those categories express agreement with armed revolution at a much lower rate than Republicans’ 44%, which leads us to two possible conclusions:

I’m working from broad prejudice, here, but I think item (2) offers the most probable explanation.

Consider the 25% of respondents who also said they agreed that “some people are hiding the truth about the school shooting at Sandy Hook Elementary in order to advance a political agenda.” That is an example of a theory that is a lot of fun provided you do not think about it at all. The idea that gun control advocates successfully orchestrated a massacre of schoolchildren, convinced the perpetrator to shoot his mother and himself, kept it a secret and then found themselves unable to break a filibuster in the Senate fails basic tests of plausibility.

As with the need for armed revolution, its support drops way down in the transition from high school to college graduates. It is a theory that appeals by its audacity, like the notion that 9/11 was an inside job or Stanley Kubrick faked the moon landing. Such ideas are fun to sort of believe, because you do not have to act on them at all. They are the Hawaiian shirts of professed views: cheap, ostentatious, and not a functional part of anyone’s daily wardrobe.

Claiming to believe that we’ll probably need an armed revolution to stop the federal government in the next few years is another example of a shocking belief that no one is at risk of having to act upon. Conservative commenters have employed the iconography of revolution and tyranny for years. Since Obama took office, their go-to rhetorical trope is to describe as despotism anything from taxes to regulation of the insurance industry. Asking Republicans whether they expect to fight a civil war to protect themselves from the US government is like asking Michelle Malkin if the President is a socialist. The answer you get is for effect, not information.

Ask an absurd question, and you’ll get an even more absurd response. As anyone who reads internet comments knows, people have a sense of how responsibly they need to talk in a given situation. If I called you up and asked whether you thought Godzilla would emerge from the sea and remake American dance culture this summer, you would probably be inclined to say yes. If you had spent the last few years listening to hyperbolic talk radio about how we need to return to the fundamental principles of dance laid out in Godzilla versus Rodan—how the abandonment of Godzilla’s signature hip-and-torso movements is a betrayal of the American ideal—you would maybe espouse the craziest Godzilla dance theory you could, just to assert your identity.

Then Godzilla would not come out of the ocean, and you would shake your head and rest in the certainty that you would dance your ass off if he did. Asking Americans whether they would support an armed revolution to protect their rights is like asking them if they would run into a burning building to save a baby. Plenty of people say they would, because they know they never will.

I am not pleased with an American discourse that has made it cool to say you would take up arms against the US government. It’s depressing that a Fairleigh-Dickinson survey has found large numbers of Americans in support of loose talk, Republicans most of all. That seems better and more likely, though, than a country where almost half of one of the major parties believes we need to make war on our own government. If I am wrong, and 44% of Republicans actually believe that, I invite them to call up Ron Paul and see about moving this revolution past the bumper sticker phase.