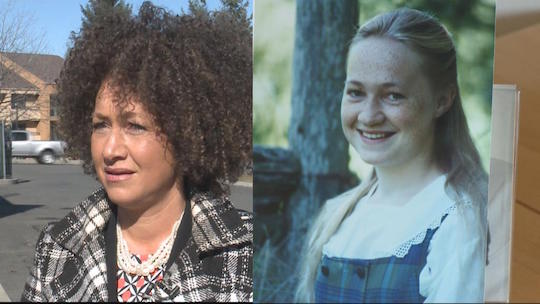 By now you have either quit Twitter or heard about Rachel Dolezal, the president of the Spokane chapter of the NAACP who identifies as black but whose parents insist she is white. It’s not my job to say what races people are, but Ma and Pa Dolezal sure seem to be right. A professor of Africana Studies at Eastern Washington University,1 Dolezal says in her faculty bio that she received an MFA from Howard and has been the victim of “at least eight documented hate crimes.” That’s a weird item to put in your CV. But everything about the Rachel Dolezal story is weird, from her parents’ estrangement from more than one of their children to her refusal to simply say she is black. Again, it looks like she isn’t. But who gets to decide?

Here’s an old joke: Which is harder in America—being black or being gay? Being gay, because if you’re black you don’t have to tell your parents. Dolezal’s story contradicts that punchline. It also draws attention to a paradox of 21st-century identity.

Most progressives agree that race is a social construct. To be “black,” for example, describes how society thinks of you more than what you fundamentally are. We’ve based our racial categories on phenotypical expressions of inherited alleles, but from a genetic standpoint, race is a bankrupt idea. The supposed divisions are not clean. Even if you still believe that bloodlines and ancient continental ancestries matter, A) nobody is purely one of those ancestries, and B) only assholes continue to argue that those ancestries determine the character of the individual.

Assholes and academics, that is. In contemporary intersectional theory, a person’s race—along with her gender, sexual orientation, (dis)ability, et cetera—is a fundamental element of who she is. I daresay that many fields, such as Dolezal’s Africana Studies, treat it as the most important element of individual identity.

When was the last time you read a critical analysis of Toni Morrison that did not focus on her race? Between biographical criticism and post-colonial studies, I defy you to show me an English-department course listing that does not look at literature through the lenses of race, gender and orientation. We say race is a social construct, and then we make it the basis for our understanding of art and the humanities.

That’s valid, because a big part of understanding the history of those subjects is understanding the massive prejudices of the past. You’d have to be a jerk to teach Invisible Man without mentioning America’s traditions of racism. But structurally, the way contemporary academics talk about race resembles those traditions.

When we talk about race itself, it’s a mere social construct. But when it touches on any other issue, it becomes the most important thing. Fredrik deBoer, who is rapidly becoming Combat! blog’s favorite theorist of intersectional discourse, has written an interesting op-ed on Dolezal and this problem for the Los Angeles Times.

One of the persistent questions in her story is, “why would someone choose to be black in the United States?” The implication is that Dolezal reaps the benefits of black identity within the spheres of university work and social activism, but she doesn’t get followed around by security guards at the drug store. She gets the perks of being black2 without suffering the institutional discrimination.

Most people find her behavior repellant. It’s like pretending to need a wheelchair so you can get a better parking space. But as deBoer notes, “That race is a social construct is a stance that brooks no disagreement in left-wing spaces. It should not surprise us, then, when an individual chooses to create a different racial identity for herself.”

Maybe it shouldn’t surprise us, but it clearly pisses us off. Dolezal’s choice and the controversy it has provoked expose a contradiction in how progressives think about race and identity now.

Racism is bullshit because your race doesn’t determine who you are. But the whole premise of Africana Studies and the current modus operandi of university humanities is that race is a hugely important aspect of who you are—maybe the most important. And you don’t get to choose it. Society chooses it for you and then uses it to determine the course of your life, even though that’s bullshit because race is merely a social construct.

Society appears to be in the process of choosing “white” for Rachel Dolezal, over her objections. It also seems to be in the process of replacing the cognitive architecture of racism with a system of thinking that is eerily similar. In the academic-progressive view, your nonwhite race is still the most important aspect of who you are. Blackness remains a totalizing identity; it’s just no longer bad.

In moments like this, that seems like a flawed way of thinking. Maybe what’s wrong with the social construct of race is not only that it encourages discrimination, but also that it’s built on false premises. Even when Dolezal identifies as black, she’s still white because her parents are. Even if she did all the things a black person does—whatever those things might be—she would still be white because of who fucked whom before she was born. We all seem to agree on that. As a way of thinking about people, I’m not sure that makes a lot more sense than what we had in the 19th century.