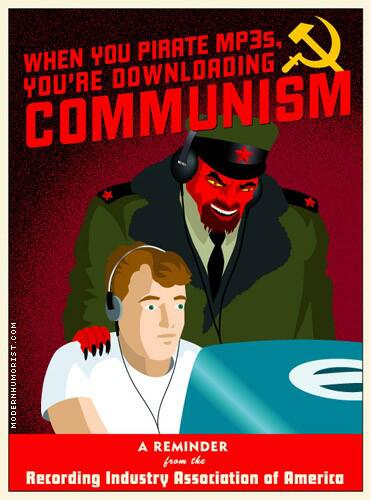 I'm not defending Stalinist Russia, but you have to admit it was a gift to future generations of graphic designers.

Gadget culture/consumer fetish pornography blog Gizmodo recently ran a fun piece about second-degree murder and six other crimes less expensive than pirating music. Obviously, you can’t go to jail for music piracy, and Gizmodo’s estimation that a year in prison is equivalent to a fine of about $50,000—the US median household income—ignores the intangible costs of spending that year married to a man named Eightball. Still, they’ve got a point. The recent finding against Jammie Thomas-Rasset—a single mother of four who shared 24 songs on Kazaa, and now has to pay Sony and other record labels $1.92 million—is laughably excessive. As usual, by “laughable,” I mean “horrifying.” I mean, come on—the woman’s name is “Jammie.” How is she not going to do whatever it takes to get the new Chamillionaire?* It turns out, though, that RIAA lawyers didn’t even have to prove Jammie downloaded any music. She almost certainly did, but the finding in the case ultimately rested on the 24 songs she had in her “Shared” folder. Whether she got them honestly or not, by making those songs available to others for download through Kazaa, Jammie violated copyright law—to the tune of $80,000 per song.

In order to make that much money via legal downloads on iTunes, the plaintiffs in the case would have to sell roughly 114,000 songs. While it’s unlikely that Jammie Thomas-Rasset is ever going to come up with that two million dollars, suing her for violating music copyrights is a much more profitable activity, from a balance sheet perspective, than recording and distributing music. That’s the genius revelation behind the business model at Digiprotect, a company that buys the rights to distribute movies in retail stores, then puts those movies on file sharing networks and sues the people who download them. Digiprotect’s intellectual property purchases expressly stipulate the right to seed those properties on Kazaa, BitTorrent and other peer-to-peer file sharing networks, for the purposes of gathering defendants in copyright lawsuits. “We get the legal rights from the companies to distribute these movies to stores, and with these rights we can sue illegal downloaders,” says company spokesman Thomas Hein. “Then we take legal action in every country possible, concentrating on the places where such action will be profitable.”

Digiprotect casts itself as a righteous crusader in the war against internet piracy, and like the RIAA they present their enormous settlements and civil case awards as deterrents to the broader practice of illegal file sharing. Looking at their business practices, though, it’s hard not to see such lawsuits as a for-profit enterprise. No matter what your stance on the ethics of downloading music from the internet, two million dollars for letting other people copy your 24 songs is an excessive fine. The problem is, intellectual property laws were drafted with corporate entities in mind. They were designed to prevent Warner Brothers from making millions of dollars by producing animated films about Marky Mouse, and the fines they levy are calibrated to deter on the corporate scale. When applied to private citizens who do not profit from their infringements, they are, from a moral standpoint, simply excessive.

The next few years are going to see profound change in the structure of either copyright laws or the music industry—probably both. Back when not-for-profit copyright violation meant dubbing your copy of the Top Gun soundtrack for your girlfriend, the law simply was not enforced on private citizens. Thanks to the internet, citizen copyright violation can now happen on a scale large enough to threaten corporate entities, and that gives them an incentive to demand a sort of enforcement that lawmakers never intended. It’s important to remember that the individual copyright violator does not profit from his file sharing, despite whatever damage he contributes to. To hold him liable for $22,500 per song is to ignore the scale of his motives, and to create a motive for corporations to encourage the violation of laws enacted to protect them. When Sony can make more money suing downloaders than selling songs, something needs to change.

* In the course of looking up the proper spelling of “Chamillionaire,” I discovered that he is CEO of Chamilitary Entertainment. Let’s hope that after he’s successfully executed his chamilitary coup, he’ll do something about the chamillions of Americans who don’t have access to quality health care, instead of getting sidetracked by straw man issues like illegal chamimigration.