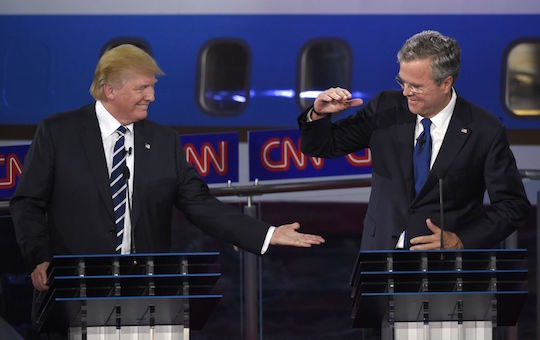 The third Republican presidential debate airs tonight at 8pm eastern on CNBC and is titled Your Money, Your Vote, which is coincidentally also the title of this year’s session of the Supreme Court. Except for the absence of Scott Walker, the field looks remarkably similar to what we saw in the second and first debates. CNBC admitted all the candidates polling above 3% nationally, which should give you some sense of the sheer, um, thoroughness of the Republican field. Some of these people are not strictly necessary. But the least necessary of them all, Donald Trump and Ben Carson, are somehow vying for front-runner status nationwide. I don’t know about you, but I expected those bubbles to pop sooner. Which brings us to a question: What could voters learn about those two men tonight that they don’t know already?

Trump announced four months ago, and he’s been the front-runner (except in one recent poll, which has Carson ahead of him by less than the margin of error) ever since. He’s also run a remarkably uniform campaign. His initial surge seemed like it might have come from novelty and ubiquitous coverage of his Mexican remarks, but by now that theory is debunked. Neither can we say with a straight face that Trump is winning with policy. Besides walling off the southern border, I defy you to identify one concrete proposal Trump supporters are rallying behind. They seem to like his personality, which is A) weird and B) the one thing about him that is certain not to change.

Carson, too, is running a personality campaign. He has even less experience to point to than Trump, unless you consider brain surgery a skill vital to the presidency. Where the Donald has no policies, Carson has policies that are demonstrably problematic: his plans to implement a 10% flat tax and a balanced budget amendment, for example, would together necessitate the elimination of Social Security, Medicare, Medicaid, all federal welfare programs and the entire US military.

Those policies might still appeal to Republican voters, but they are hardly the centerpiece of Carson’s campaign. His charm seems to lie in his propensity to make bold—some might say irresponsible—remarks. That’s what vaulted him to national attention, when he suggested that the Affordable Care Act was as bad as slavery. He still refuses to walk back the claim that Jewish gun ownership might have stopped the rise of Hitler, and last weekend he went ahead and compared abortion to slavery, too.

Dr. Carson should learn a third event from history, but my point is that his candidacy, too, seems resistant to the ebbs and flows of a more serious campaign. His support among evangelicals makes him more vulnerable to revelations of personal wrongdoing than Trump, but neither of them is going to commit a gaffe tonight. Short of expressing admiration for Hillary Clinton, what would a gaffe from Carson or Trump even look like?

So in answer to the question at the top of this post, the most likely route to change tonight seems like an exceptionally sweet burn from Rubio or Cruz, or some other performance that makes them comparably exciting to Trump and Carson among low-information voters. That’s the swing bloc in the GOP so far this cycle. The problem with low-information voters is that they don’t change their opinions easily, particularly in response to debates. I hope tonight is something other than the ongoing parade of Washington outsiders, but I can’t say I expect it.