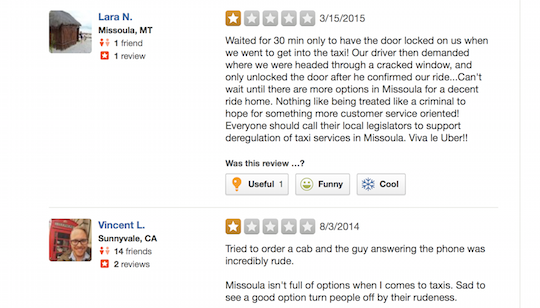 There are two taxi companies in Missoula: Yellow Taxi, which currently enjoys a one-star rating on Yelp, and Green Taxi, which may or may not have purchased a second car. If you call a cab in this town, the wait is usually between one and two hours. I’ve been utterly stiffed at 6am by Green Taxi and missed a flight as a result. Also on my way to the airport, I’ve been picked up an hour late by Yellow Taxi and then told we were going to stop for a second fare. The dispatcher of the same company once told me to fuck myself when I called to ask where my cab was.

These two enterprises have been protected from the invisible hand of a free market by the Public Services Commission, which has used its regulatory authority to quash any competing cab companies in Missoula for the last several years. But this cabal of incompetents can suck it from now on, because Uber is coming to Missoula. The Montana legislature approved the transportation network carrier’s operation in the state, and because Uber is technically not a cab company, the PSC cannot regulate it out of business. Soon, the owners of Yellow and Green Taxi will be starving in the streets, their children reduced to performing janitorial work at the customer-service call centers of Chinese pornography companies. Or they’ll offer better, more reliable service. Either would be okay with me, as I explain in this week’s column for the Missoula Independent. We’ll be back tomorrow with Friday links.