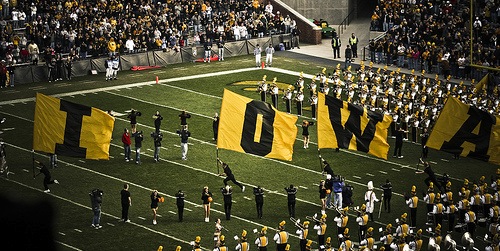 The Hawkeyes start off one and three again.

Combat! blog is hustling to make its train this morning—trains! east coast! food that employs seasonings!—so I have to use one half of my ass to pack. But don’t worry—the other half is completely devoted to this post. Those of us who have spent the weekend with Iowans were thrilled*

at the news that Ellen Lewin, anthropology professor at our beloved U of I, responded to a campus-wide email from college Republicans with an outburst of profanity. In case you’re wondering, A) “F*** you!” means “Fuck you!” and B) I know because I was somehow able to crack Raw Story’s complex cipher and C) “responded to a campus-wide email” means “hit reply all.” Ellen Lewin is fifty. She is also in trouble, despite having issued the world’s most petulant non-apology.

With University approval, the Iowa College Republicans sent out a campus-wide email to promote their Conservative Coming-Out Week, which featured events such as a film celebrating the life of George W. Bush and an “animal rights barbecue.” Now is a good time to remember that Iowa College Republicans is run by nineteen year-olds. The notion that conservatives would have to “come out” is part of what I consider the most irritating trend in contemporary Republicanism (1992–present,) by which conservatism is treated as a somehow rebellious stance against a massive liberal mainstream. It’s true that Republicanism is only a safe position around older people, bankers, churches, small towns, suburbs, people who own car dealerships, villains in ski movies and the majority of Americans who voted in the last election, but that’s not the point. The point is that a bunch of college kids invited their anthropology/gender studies instructor to a barbecue, and they were instructed to go fuck themselves.

Let us only briefly consider the suspect treatment of anthropology and gender studies as one field of inquiry. That’s like meeting a professor of physics/divination, but whatever. My concern is that Lewin’s brief lapse in judgment seems to have continued for several days, as evidenced by the wording of her quote-unquote apology. “This is a time when political passions are inflamed, and when I received your unsolicited email, I had just finished reading some newspaper accounts of fresh outrages committed by Republicans in government,” she said in an email. “I admit the language was inappropriate, and apologize for any affront to anyone’s delicate sensibilities.”

First of all, one’s sensibilities must not be terribly delicate to detect the affront in the imperative sentence “fuck you.” If you are not offended by that, what purely verbal communication could offend you? Second, when you are apologizing for advocating the fucking of the Republicans, it is perhaps best not to A) describe said Republicans’ attempt to fulfill their duly-elected offices as “fresh outrages” and B) make an emotional appeal based on the trauma you suffered by reading the newspaper. The newspaper is not a mind-warping experience. We’re not talking about your grandpa’s lingering resentment of the Japanese, here.

But at this point, we are scoring a fencing match between spastics. Lewin’s response is apologetic the same way an animal rights barbecue is political. This story is so infuriating in part because it reminds us of the degree to which politics has become separate from any actual political issues, most often taking the form of, well, lifestyles. Eating meat? Conservative. Being a gender studies professor? Liberal. Things that involve the United States government or voting? Not mentioned. “Fuck you, Republicans!” is not a political statement; it is an expression of dumb loathing. We should save that kind of thing for Ohio State.