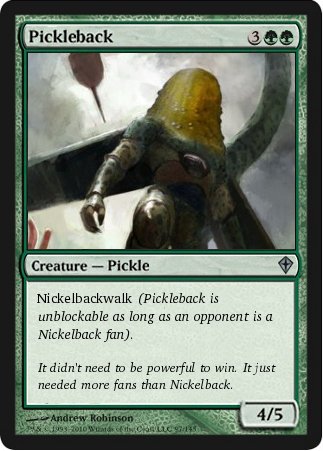 Those of you who recently made the switch from Friendster to Facebook are probably familiar with the omnipresent “Can This Pickle Get More Fans Than Nickleback?” group. (Warning: photograph of anthropomorphic pickle engaging in apparently consensual sex act with Chad Kroeger.) The group was founded in February, back when Nickelback’s Facebook page listed 1,380,820 fans. While new Nickelback fans have since trickled in, new fans of the pickle that symbolically opposes Nickelback rushed as a raging torrent, and at some point on Friday afternoon the pickle pulled ahead. Right now, the pickle has 1,456,556 fans, while the group Billboard two months ago declared the Band of the Decade has 1,418,801. On Facebook, at least, This Pickle has more fans than Nickelback. Which raises some interesting questions.

First of all, if you’re feeling even a shred of sympathy for Nickelback at this moment, you A) probably don’t own a radio and B) should have a look at this. Chad Kroeger’s ominous statement that “your page will be closing in 2 weeks”—coming as it does the Sunday after This Pickle eclipsed Nickelback’s fan total—suggests that he was aware of the group the whole time, and somehow not only failed to see the humor in it but also decided to wait for the awesome popularity of Nickelback to silence his detractors. If the message came from the real Chad Kroeger, and if the real Chad Kroeger has convinced whatever shadow government administers Facebook to shut down the This Pickle fan page, it evinces baffling douchery. How does a thirty-six year-old man not know better than that? He’s like the villain in a movie about skiing.

You should also know that Nickelback has sold more than 30 million albums worldwide. They’re the best-selling band of the last ten years, despite nearly universal critical derision and the fact that you can take two of their songs and do this. Nickelback is why you absolutely must have a working CD player in your car, yet they are, from the standpoint of a person who makes money by producing and distributing recorded music, the best band in the world. Obviously, we are talking about a broken industry, and This Pickle proves it.

Granted, Facebook is an extremely skewed metric for measuring the popularity of anything. “When I hear myself eating crunchy food, I wonder if other people can hear it, too,” for example, has 1,184,473 Facebook fans, whereas “The planet Earth” has only 325,405. Clearly, novelty counts for something here, and the novelty of “Can this pickle get more fans than Nickleback?” certainly has something to do with its success. The abject failure of “I bet I can find 169,000 people who hate Nickelback” (129,315) proves that, but the poor performance of the “hate Nickelback” meme also demonstrates the operating principle behind This Pickle. It’s not that Nickelback sucks. It’s that a picture of a pickle can garner as much popular acclaim in one year as Nickelback did in a decade. Without the pickle it doesn’t work, because the pickle proves what we all know and Chad Kroeger tries vainly to deny: popular acclaim is meaningless.

Part of the reason Nickelback is popular is that they’re popular. I would never have heard Nickelback had I not listened to Lazer 103.3 or gone to a strip club at some point during the last decade, and they wouldn’t have sold 30 million albums were it not for the unrelenting efforts of various flacks at EMI. Lord knows, it’s not reviews driving the sales. Those of us who grew up after the death of Elvis know that the legions of dedicated fans around bands like Nickelback—or Creed, or Celine Dion, or Menudo—are largely imaginary. It’s marketing, and the top-selling band of the last decade is no more the best band in America than whoever they get to play the Super Bowl. Like most major record labels, EMI is selling music to people who aren’t into music. The 30 million Nickelback CDs floating around the back seats and pawn shops of America were purchased by people who just want something on. Maybe Nickelback is somebody’s favorite band, but you’ll never meet them. If you don’t have to listen to the radio, such people might as well not exist.

For most of the history of the recording industry, though, being popular was the only way to get really popular. Radio play, reviews in Rolling Stone and appearances on The Tonight Show were how bands got more people to listen to them, and the bands without such weight behind them were consigned to club shows and mixtapes. People who actually cared about music had to discover new bands through alternative means, which is how “alternative” became the industry’s most useful marketing term. Now, though, getting on The Tonight Show is not the only way to introduce your band to 1.5 million people. You can also do it by being a pickle on Facebook.

Imagine you’re the A&R executive in charge of marketing Nickelback through digital media. How do you feel when This Pickle gets more fans? If it were me, I would be tempted to go into my boss’s office and explain that the opposition just had a better product. Nickelback is an awful, awful band, successful in the same way that the guy who asks every woman in the bar for her phone number will successfully get two. For the last ten years, an awful band has been able to succeed wildly, thanks to a multimillion-dollar industrial apparatus designed to ensure that as many people heard them as possible. EMI could have done the same thing with Goo Goo Dolls, or Third Eye Blind, or NOFX. The operative phrase is “could have,” though. Like a lot of media companies, EMI’s decades-old apparatus is rapidly falling apart. I don’t listen to the radio, as evidenced by my hearing “Single Ladies” for the first time in Target three months ago. As much as I hate to admit this, I look at Facebook every day.

That This Pickle can get more fans than Nickelback is proof that you don’t have to be popular to be popular anymore. As with Nickelback, few would argue that the pickle succeeded on its own merits, which begs the question: Can This Modest Mouse get more fans than Nickelback? Can This Hold Steady or These Los Campesinos? One and a half million fans isn’t a lot to EMI; they spent a lot of money putting Nickelback on TV and the radio and endcaps at Best Buy, and 1.5 million people don’t buy 30 million albums. To your band, though, who spent a hundred bucks setting up a website and linking to it on Facebook, 1.5 million is a worldwide audience. The make-or-break factor, in that context, isn’t a guarantee from KISS FM that they’ll play you once every 55 minutes. It’s whether or not you really, really suck.